I’m starting to see a pattern here. Weekends rock, weekdays suck. By the time Friday rolls around I invariably find myself thinking “Man, why am I even here? I should just be back in sunny California earning double the salary and spending time with my family!” Then the weekend goes by, and I find myself thinking “Damn its freakin’ awesome here.”

Neither this week nor weekend proved to be an exception to the pattern.

You may have noticed something interesting in there. “Sit on the floor outside the office using the Internet.” One of the very many company rules is that personal computers are not allowed inside the office. My tailbone has sustained noteworthy damage as a result.

Thankfully, after 3 or 4 weeks of passing employees commenting “Why don’t they just let you use that inside?? Weird…”, I received special permission directly from the president. Provided that I don’t use it near the company computers and that I don’t start until 7:30pm. Squeezin a few more minutes of work out of me, ‘eh? 😛

But I’m stoked. My new base of operations is a big leather couch surrounded by a 5.1 sound system in front of a 46″ Full-HD TV with a Wii or PS3 game to entertain me whenever I decide to look up. And note: that’s Full HD, not Regular HD. Sweet.

Now here comes the bad news. Reminiscent of my previous struggle to get online, after nearly a month of waiting I just recently got a call from YahooBB. “Sorry, you can’t get the Internet at your apartment. Ever.” I was about ready to kill whoever’s in charge of that company until I found out that the problem was never really YahooBB at all. It’s always been NTT.

NTT is the pathetically unregulated monopoly that controls virtually every phone line in Japan. No matter what Internet or telephone provider you use, you have no choice but to go through their lines, pay them a hefty fee, and wait for them to provide slow and unsatisfactory service. If you already have a phone line, YahooBB will turn on your DSL the next day. But if a visit from NTT is required, expect to sit around waiting for a month or more. After all, what reason do they have to do any better? They control all the wires, so if you want one, get in line!

Anyways, the problem they initially reported with my connection was that “Too many people in my area have DSL and there aren’t enough NTT lines available.” This seemed a bit fishy as I was living in a completely empty apartment building, so with the help of a Japanese coworker I did a bit of digging. Then the real problem revealed itself.

I had my address wrong.

Kyoto, an ancient city that’s been growing for around 1,500 years, has developed an incredibly complex addressing system over the centuries. When combined with the difficult Japanese writing system, you often get addresses that even locals are unable to read, let alone follow. I can only assume that this is why my apartment’s welcome packet ended up with a mistake in the address.

So the NTT guy came, looked at the wrong building, a presumably full building, and said “Sorry, can’t do anything, cancel the application.”

The next step? I re-apply to wait another month! Yippee!

An interesting note on Japan’s addressing system: Unlike the US, locations aren’t designated by number and street. In fact, most streets don’t even have names. Instead, the country is divided up into smaller and smaller “grids” – first Prefectures (like States in the US), then cities, districts, wards, blocks, and finally building numbers. This worked fine hundreds of years ago when there weren’t very many buildings to be addressed, but has gotten insanely complicated since Japan started to modernize. This lack of street names also leads to a great deal of difficulty when giving driving directions – which usually sound something like “Turn right after you pass the Lawson convenience store, go three blocks and you’ll see a parking lot on your left, turn on the street across from it, …” 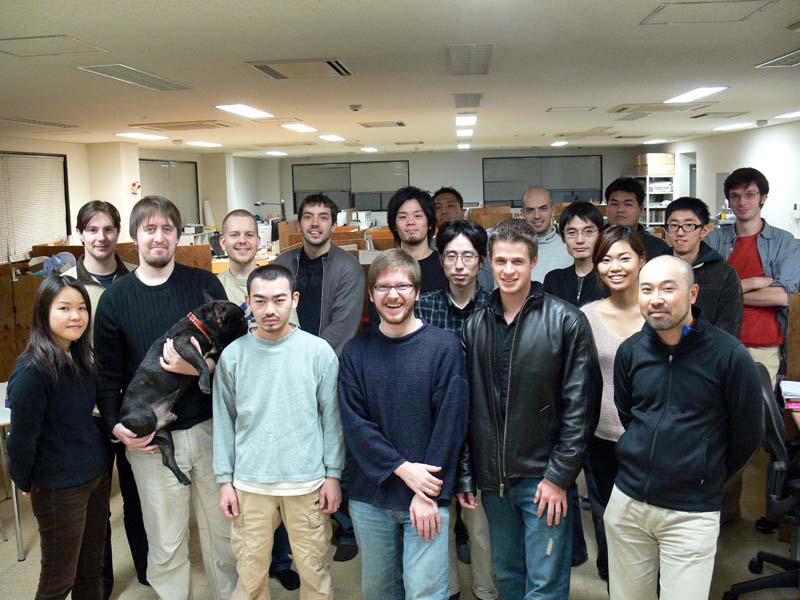 Company Photo!
Actually, this is probably about half the employees – since the holidays are coming up a TON of people are taking “refresh time” in exchange for the mega-crunch before shipping their last title.

Alright, now on to some fun stuff! This Thursday was my first ever 忘年会 (bounenkai: year-end party). As I mentioned previously, socializing and drinking with your company is a huge part of businessman-culture in Japan. Sometimes this means casual outings after work, but sometimes it means company-wide parties. The “end of the year” is always the latter.

Enjoying some beer and nabe at the bounenkai.

For this year’s bounenkai, my company reserved a large, traditional tatami-matted room in a nabe restaurant overlooking the small creek running down Kiyamachi. Of course, it was all-you-can-drink (company parties always are). Much fun was had as we chatted, played Bingo, and stuffed our faces with boiling goodness…all the while being served by an army of kimono-clad servers. My bingo prize was a “silly mask.” I would’ve preferred a “+1 to vacation days,” but hey, at least I got something, right? 😀 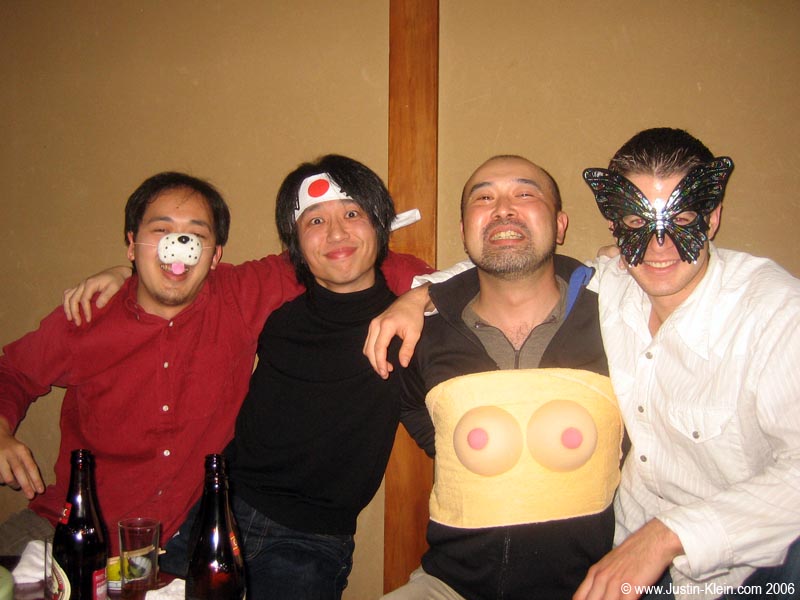 Showing off some of our Bingo prizes. The guy in the dog nose is my supervisor.

The next day, everyone was allowed to come into work at noon so they’d have some time to sleep off the mix of beer and stew that they’d accumulated the night before. I woke up and enjoyed a relaxing morning of cooking, cleaning, laundry, and TV. I never realized quite how much warmer it is at noon than before 8am and after 8pm, the only hours I’m typically at home. It was very pleasant to just sit back, enjoy the smell of incense from a nearby shrine, and listen the sound of children playing baseball in a schoolyard across the way. I really wish I had more free time 😛 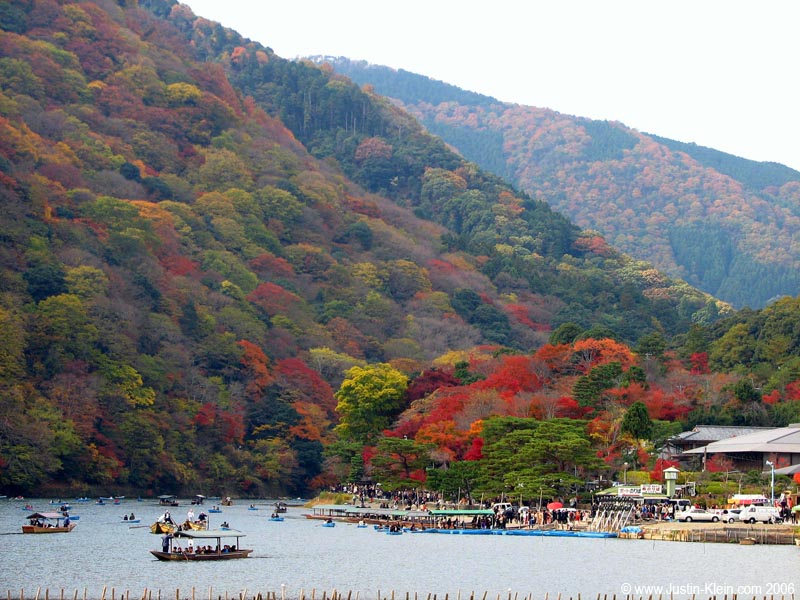 Since I haven’t taken any new pictures for awhile….more fall colors!

After work, I met up with Yano for dinner at a local izakaya, but decided to head home early (rare for me on a Friday, I know). I wanted to keep my head clear so I could work on some website revisions the next morning – now that I’m back in Japan the hit-count is starting to climb, and there are a number of things that have been on my “To-Do” list for awhile now.

Plus I already had plans to go out on Saturday night. 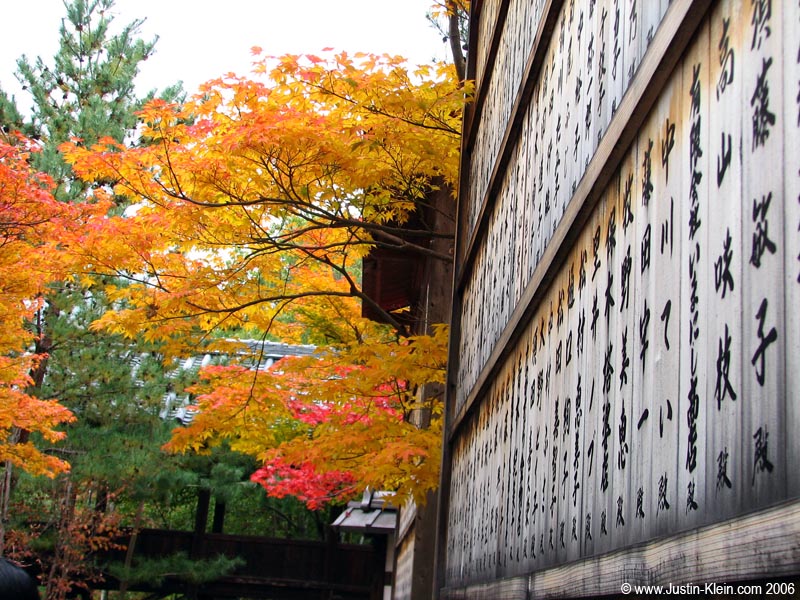 My drinking buddy for the evening was Tomomi, a friend I don’t believe I’ve mentioned before, but our meeting is actually a pretty interesting story.

The first time I ever came to Japan, I arrived with no knowledge whatsoever of the culture or language. Nick, my travel partner, could speak basic Japanese, but wasn’t particularly familiar with many of the areas we’d been exploring. We therefore often resorted to roaming around and asking locals for whatever help they could offer. 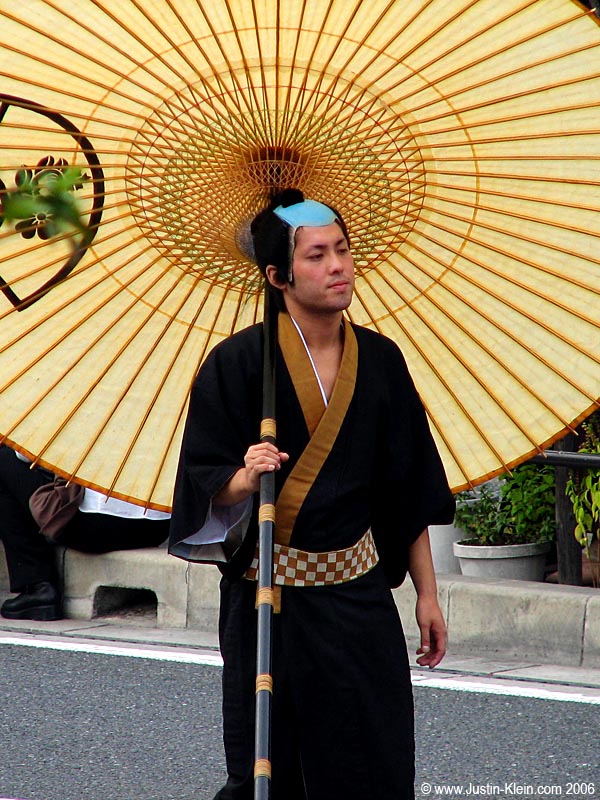 One such evening, we managed our way to the Kamogawa riverfront here in Kyoto. In awe of the fact that students are able to gather in groups, drink beer, and launch fireworks over the river as they please, we decided that we had to do the same. We spotted a group of guys and asked where they’d bought the beer and fireworks. But instead of referring us to the convenience store less than 50 yards away, they thrust some of their own beer into our hands and invited us to join. A perfect example of Japan’s awesometude.

A short while later, a group of girls passed by, one of whom was Tomomi. After a bit of smooth talking on the part of our Japanese hosts the girls had joined our party. Our following “conversation” was hilarious – little more than a random sputtering of the few nouns and verbs they had memorized during their time in some of Japan’s notoriously ineffective English language courses. Something to the tune of “Japan…nice…good…like? Fun! River, pretty.”

When we separated, Tomomi gave me her phone number. “Yeah, right, when the hell am I gonna use this?” I thought to myself. But two years later, I was back in Kyoto as a student and decided to send her a mail. She replied, but my Japanese was so weak at the time that I could barely understand her Kanji…so I quickly gave up and retired to studying. For some reason, we never got back in touch during that year abroad.

Then this October I came back again. Her contact information still hadn’t changed. But I had. I could talk to her!

Three years after randomly meeting at the Kamogawa riverfront and listening to her string together nonsensical phrases in English, I found myself sitting in a Kyoto izakaya with Tomomi and having a real conversation for the first time ever.

9 Responses to “The NTT Monopoly”