A lonely road into the Egyptian desert.

Hiking up Mt. Sinai was interesting. In order to witness sunrise from the summit, we began our climb at 2am and climbed throughout the night. No big deal. Except for a few things:

1) I got zero sleep before the hike on account of the damned mosquitoes. I don’t know what it is, but ever since I can remember I’ve had a problem of attracting a ludicrous number of these little nuisances: I’ll be camping with my family and no one will have a single bite but me, who’ll have hundreds. When I got out of bed at 1:30am for our hike, there were four of the little bastards sitting on the wall right next to my head. Squishing each yielded a one-inch diameter blood splotch on the wall. Nice.

For some reason the plastic bags of water that our Bedouin hosts had hung all over the camp to repel the insects didn’t seem to work very well. I can’t imagine how they would 😛 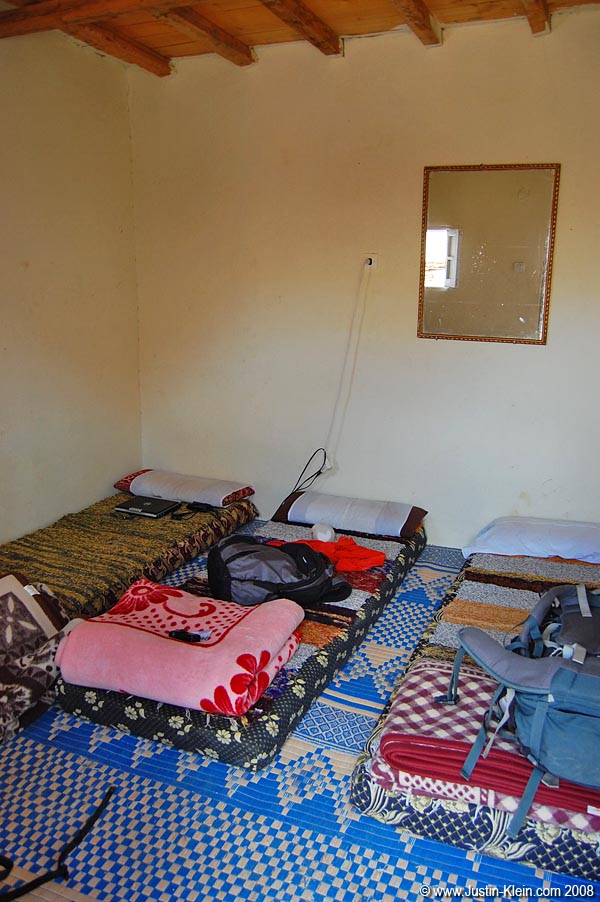 2) To get to the actual trailhead, Niev, our Israeli roomate at the Bedouin camp, hitchhiked with the local police. I thought this was pretty ballsy considering that Israelis aren’t allowed to climb without a special permit and escort. He got around this by simply saying he was American and having one of us show our passports first – betting that the cops would be too lazy to verify all three. He was right. 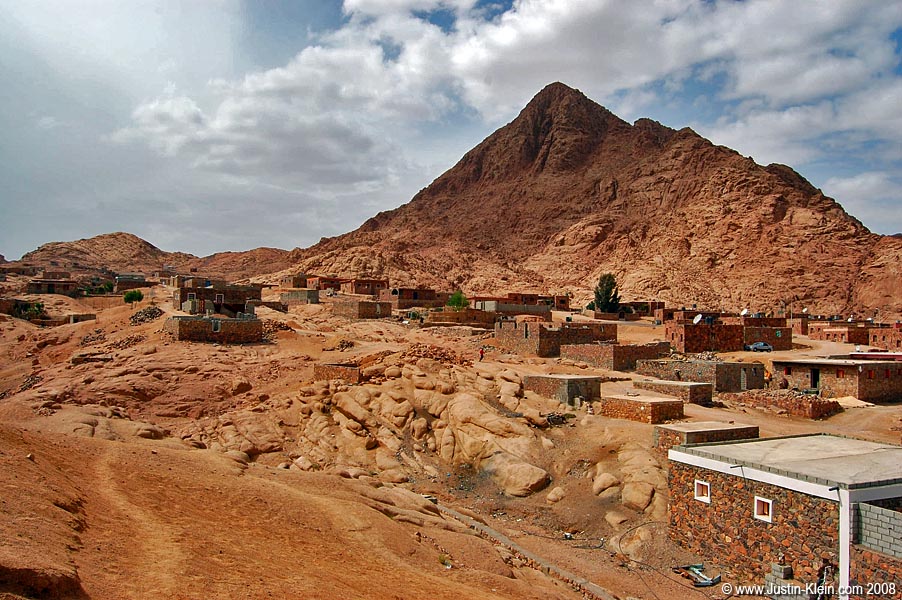 A little town at the foot of Mt. Sinai.

I’ve actually been consistently surprised on this trip with the lack of anti-Americanism. In today’s International world, being an American is no longer the thing of pride it once was – and I’ve often received some very negative responses when stating my nationality (“What’s up with your government?? Why do they stick their noses in everyone’s business? Why do they start wars?” etc etc). But in the two Muslim countries I’ve so far visited, where you might expect anti-Americanism to be at its worst, the reality is quite the contrary. “You American?? Very good! I love America! I want to go!” Only rarely does someone make a comment about Bush, and thus far they’ve all been done very respectfully.

(Pretty much the most common introduction you’ll hear is “Where you from? …America? Good! You are welcome.”)

A camel parking lot on or way up the mountain.

3) We were offered camel rides approximately 36 times on the way up the mountain (no exaggeration; I began counting around the 7th offer). Every single Bedouin you pass on the way up. “Camel?” “Camel?” “You want ride camel?” “Camel, good price?” “How about camel, my friend!”

Incidentally, the other day Mike pinpointed exactly what it is about how camels walk that makes them look so doofus: they step with both legs on the same side simultaneously. That is, their left-front and left-back legs step, then their right-front and right-back legs step. Combine this with the pigeon-like head bobbing and the fact that they’ve got an extra joint in their back legs and you’ve got one weird-looking animal. 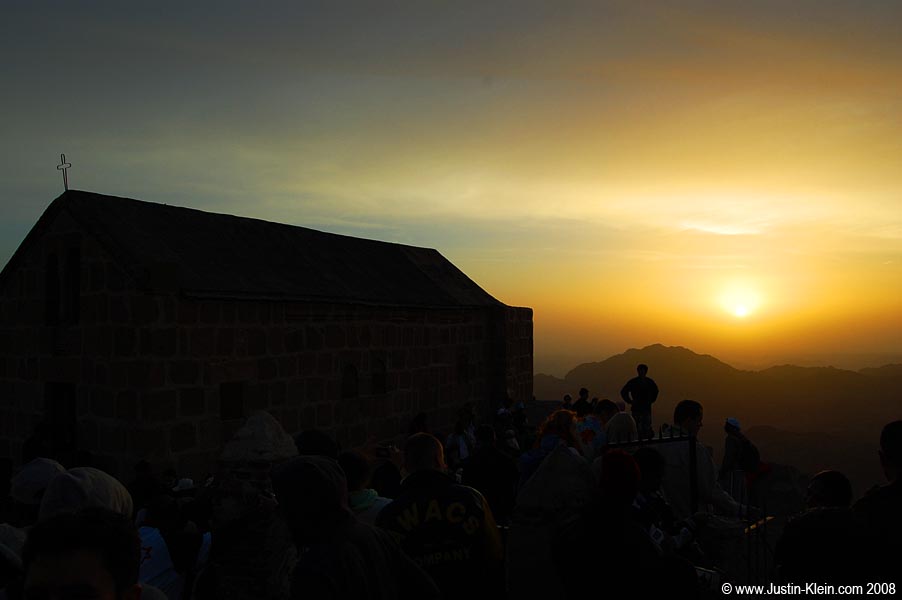 A beautiful sunrise at the summit.

4) The entire country of Korea seemed to be on the mountain with us. No, scratch that – All of Southeast Asia. At first we thought we’d just gotten unlucky, showing up on a day particularly heavy with tourists – but when we reached the summit just before sunrise we realized that they were in fact religious pilgrims. When half the mountaintop began singing religious hymns the environment suddenly became…very hypnotic.

The sunrise however, while quite beautiful, was not as impressive as Mt. Fuji. Perhaps it’s because the weather was so hazy. 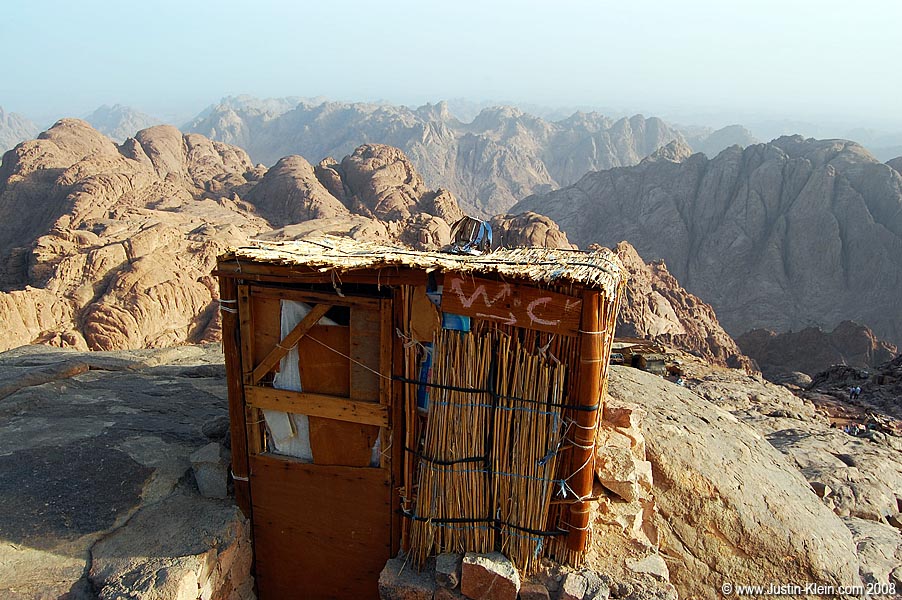 A quick pitstop before heading down.

On the way down the mountain we walked Elijah’s 3750 Steps of Repentance to St. Kathrine’s Monastery, built on the supposed site of the Burning Bush where Moses was appointed to lead the Israelites out of Egypt and into Canaan. And wouldn’t you know it? The Burning Bush was still there! I’m not sure what species of bush it was, to have survived all those thousands of years in that very same spot, but whatever it is, most impressive 😆 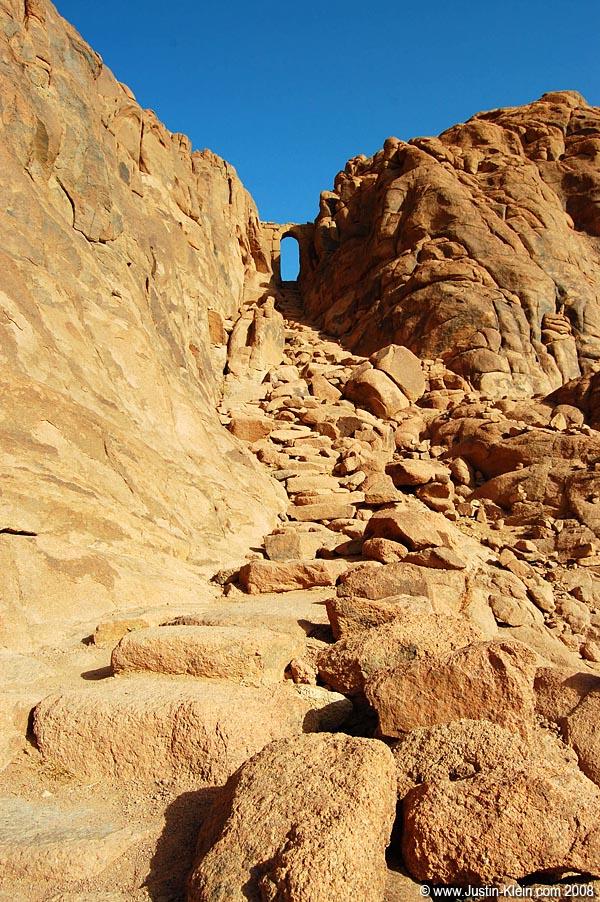 Does that look like a Stairway to Heaven or what?

Inside the Monastery would’ve probably been nice except that there were so many tourists you could barely move. It was more packed than any Japanese festival I’ve ever been to, which anyone who’s lived in Japan will know is pretty insane. We got out of there in a hurry and headed back to the camp to grab our things and catch the 1pm daily bus to Cairo.

The 1pm bus…that had mysteriously disappeared.

A common problem in third-world countries.

Looking down on St. Kathrine’s Monastery

So as a substitute, we hired a minibus to drive us to Suez where we could catch any of the regular buses to Cairo. We got ripped off a bit on price, but as the difference only came out to $5 or $6 apiece we decided it would be a better alternative than hanging around in Sinai until the next official bus at 6am the following day.

Twenty-something military checkpoints later and we were in Suez.

Suez was the first big city I’d seen in Egypt, and it felt very different from anywhere I’d ever been. The most immediately noticeable trait was the amount of litter – absolutely mindboggling. There were some places with so much litter you could barely see the ground, especially in open lots without buildings. Like most Egyptian cities there was some sand scattered here and there, but in Suez it was often supplemented with rubble, presumably remnants of collapsed buildings or leftover material from construction projects. The buildings themselves were made of concrete and generally complete (a contrast to the deteriorating sand/brick dwellings in Dahab and Sinai). And unlike Dahab and Sinai, two much more touristy destinations, in Suez English seemed to be quite a rarity.

We were only in Suez for a few minutes – to transfer from the minibus to the city bus to Cairo – but even that short period of time was quite…”culture-shocking?”

Then Cairo shocked us once again.

Virtually everyone we’ve talked to in Egypt has said “Avoid Cairo. It’s dirty, overpopulated, overpolluted, loud, and annoying.” Both Mike and I had an image of, basically, Suez – but perhaps a bit more developed. Like a slightly more modern version of what Cairo looked like in Indiana Jones when Markus Brody was wandering the streets shouting, “Does anybody speak English?”

(In fact, many areas of both Dahab looked just like that – even today – albeit significantly less busy). 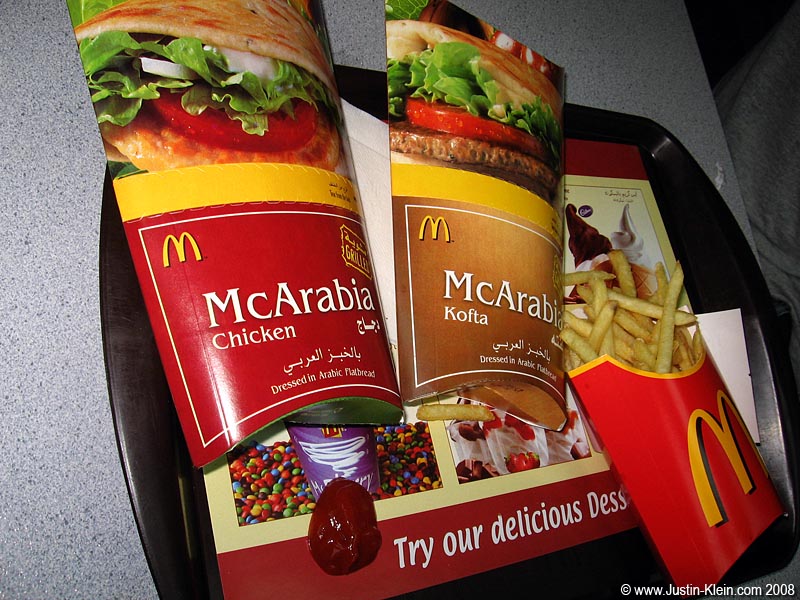 Well, although we haven’t really been out to explore the city yet, what we saw from the bus ride in was as modern, clean, and firstworld a city as Tel Aviv. The only difference is that 99% of the people are dressed in religious attire (universal in Egypt) and everything is written in Arabic. But the streets are clean and lined with Citibank, Fedex, street cafes, and Mc Donald’s. There are just as many run-down old pickups as there are shiny new Mercedes-Benz’s. Maybe we just passed through the nice area, but it wasn’t at all what we envisioned Cairo to look like.

We rode the subway to Sharia Talaat Harb in the center of the commercial district, checked into a spectacularly-located hostel (with a balcony looking right over the area’s main busy intersection and an incredibly friendly staff), grabbed our first meal in the last 7 hours, and passed out for the first time since 2 days earlier.

3 Responses to “Sinai to Cairo”