We love our Pee-wees. One of the many useful roles they play is to remind us stupid gaijin of our school’s name whenever we forget. It’s Rits! It’s spelled out right there, in romaji!

I’ve said it before, I’ll say it again: I have no interest in baseball. But this game was awesome. Aside from the cheerleader parades and live music around campus promoting it over the last week or so, the game itself was so high-energy that I could barely keep up. For the entire game the band was playing and the crowd cheering at the top of their lungs. Literally, non-stop for the entire game. Perhaps it’s been so long since I’ve been to an American sporting event that I forgot what it was like, but I really don’t remember it being this intense.

Here is a video of just a taste of what I’m talking about. It starts off with a sample of the semi-regular parades and cheering on campus, and finishes at the actual game. If you listen close at the very end, you can pick up on Dylan’s contribution to the evening’s entertainment with his cry of “TAKE THAT, ENVIRONMENT! YEAH!” as the crowd lets hundreds of balloons go into the air.

Other recent developments:
1) Tomorrow my fellow shamisen students and I were invited by our sensei to his concert in Gion. For free. Excellent.
2) This weekend I will be going to Osaka for drinkage on Friday, and a joint birthday party for myself and Okaasan in Uji on Saturday. Excellent.

3) I just had my oral interview for my application to extend at Rits. Man, my speech still sucks, but it sure has gotten approximately 8,627 times easier to understand the interview questions since my placement interview right after I got here. I suppose that means I’ve learned something? Excellent.
4) My YHM nickname is Boobacles. That’s boob-a-cleease. Actually this is not a recent development. I’ve just neglected to mention it prior to today. Excellent…?
5) Today I was given a free 500 yen gift certificate for McDonald’s by a random crossing guard because I was a gaijin and I spoke with him for two minutes during a red light. It’s good to be a gaijin in Japan. 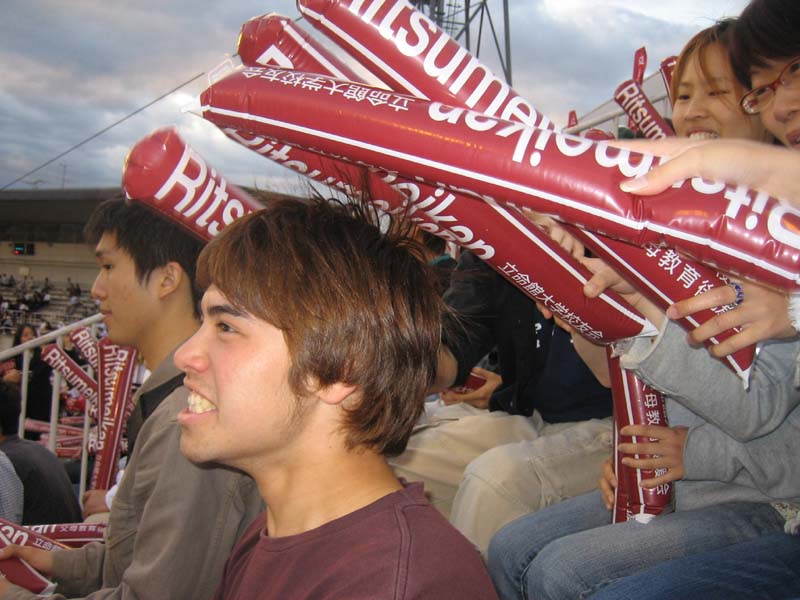 Whenever we have any trouble with the Yakuza, we just charge up our secret weapon and let him rip. Today we charged him up just to see what would happen in a large crowd. It wasn’t pretty.

6) The season finale of 24 ruled, as expected. We’ve been watching them here one day after they air in America every Tuesday night. Thank you, Internet!
7) Videos take a long time to make (and use a lot of bandwidth) so I was curious about what kinds are of interest. I take tons and tons and tons of footage here, but because what I see every day is pretty different from what most of you probably do, what I find interesting enough to post is also probably pretty different. Traditional stuff? Temples and shrines and festivals? Nightlife stuff? High-tech Japan stuff? Performances? A mix of everything? So far so good? Give me feedback, people! At least whether or not the ones I do post are interesting or not, so I know, for example, not to put more street performances but instead spend the time on other things. I ain’t puttin’ this stuff online for ME, you know!

Andy: Thanks. You always acknowledge my efforts as worthwhile 🙂 To answer your question about the dudes in suits doing karate, now that you’ve undoubtedly seen the video, you know exactly as much about them as I do. I’m pretty certain they’re nothing more than male cheerleaders turned 100% bad-ass by thousands of years of ninja-ry.