Usually, my “observations posts” come from all the leftover blog notes that fail to find their way elsewhere into the narrative. Today’s is a bit different. Malaysia has been a particularly unusual stop, as I really did settle in and put all fun and tourism aside to focus almost exclusively on work. I usually only do this at home; I lock myself indoors to “catch up on life,” saving the fun for my next trip overseas. Even during my longest international stints (i.e. 3 months in Kyoto or a month in Hong Kong) I’d still go out every weekend or meet up with friends. But not here. The main reason I chose to stay in Malaysia for so long was because I knew I’d have nobody egging me on, so I was free to, say, buy a new hard drive and spend two days migrating over my system – just the unfun kind of thing I’d usually do back at home. But I’m not ready to go home, so I had to handle it now.

The result was a slew of unusually boring day-to-day notes; little thoughts I had while looking out my window or sitting in a restaurant or dropping off laundry down the road. While they seemed interesting enough at the time, coming back months later I realized that they pale in comparison to things like watching an entranced Indian shove a metal trident through his cheek – and are probably not worth publishing.

Thus, in favor of catching up and getting back to realtime writing, this time I’ll whittle things down and select just some of the more prominent “observations” to share…

• In many ways, Malaysia reminds me of Hong Kong – or perhaps even moreso of Macau. Macau was my first real exposure to a place where such vastly different cultures coexist in such close proximity; Portuguese street names occupied by American casinos patronized by Chinese businessmen. Malaysia is no different, aside from its components: A multicultural fusion of Chinese characters, Arabic influences, and the whole range of skin colors. It’s a 60% Muslim country that’s full of Buddhist and Hindu temples; a peninsula in SouthEast Asia that feels nothing like its neighbors to the North or the South. One minute you’re eating Tandoori Chicken with your bare hands and the next you’re tasting a steamed pork dumpling with chopsticks. What part of the world is this? It’s often hard to tell.

• In addition to Malaysia’s cultural diversity, the city of KL in particular is remarkably different depending on where you are. For example, Chinatown – where I stayed – feels like a bit of a dump with its dilapidated buildings and littered streets. Yet the area around the Petronas Towers is as ritzy as it gets: luxury sedans, mega shopping malls, elevated monorails, and glistening skyscrapers. On a whole, KL is a modern and flashy city that continues to develop at a remarkable pace. It’s hard to imagine what it’ll be like in a further 10 years. 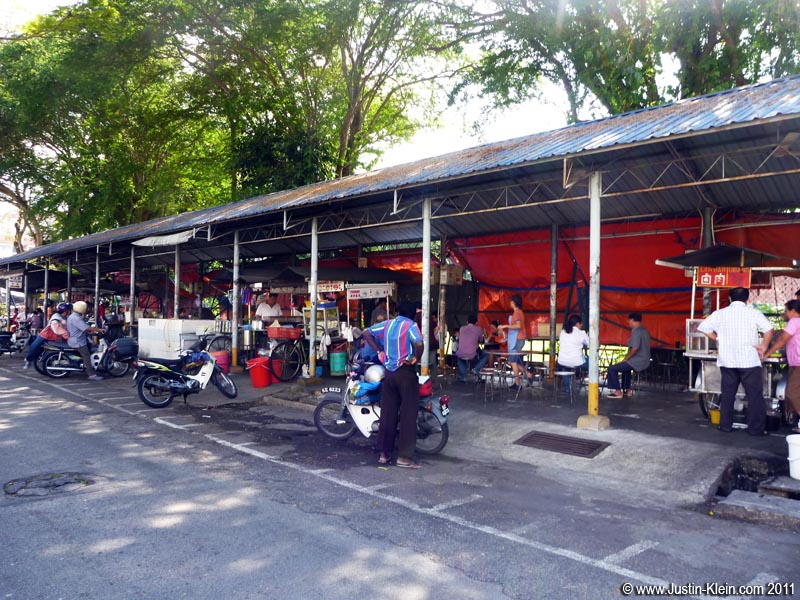 This is a *very* small example of a hawkwer court in a quiet suburb of Georgetown: Independent little carts or booths sharing a group of tables, where you have to buy a drink to sit down.

• Public “hawker courts” are a common form of eatery – especially in Penang and Kuala Lumpur. A sort of “covered warehouse with tables,” these areas are full of unrelated little stalls, each with its own specialty. Interestingly, permission to sit is often based on buying drinks rather than food – if you order just food you can’t sit, but just a drink is fine. Perhaps the drink stalls are the ones responsible for maintaining the tables?

In this exact location – on a highway miles from the nearest town – I had full reception and 3G internet. Impressive!

• I was surprised to find that the high-speed 3G coverage extends nearly everywhere in (peninsular) Malaysia, right down to the palm farms between cities. It’s far more expansive than in Thailand, where as soon as you leave Bangkok it drops down to dialup-like speeds.

• English isn’t just a second language in Malaysia…it seems like the language of Malaysia. Throughout my entire stay I barely encountered a soul who couldn’t converse – everyone from taxi drivers to convenience store clerks were essentially fluent. I thought Thailand was good, but wow – I hadn’t seen anything yet!

• On the other hand, I have to admit that Malaysia isn’t really a place I’d like to stay. Somehow, in general, I just didn’t get that friendly of a vibe. Thailand is known as the Land of Smiles, where (despite their potentially dubious motives) nearly everyone acts cheery and welcoming. The nightlife is amazing, businesses are opened 24/7, girls are hot, and food is incredible. But here, nightlife is nearly nonexistent (and very expensive), things close inconveniently early, and I honestly just wasn’t that big a fan of the food. There’s no doubt that Malaysia is worth a visit…but after more than a month I was pretty anxious to leave. Virtually every overland backpacker I met felt the same.

• Guesthouses throughout SouthEast Asia have an interesting “booking” policy that I’ve never experienced anywhere else: existing guests always take precedence. In other words, once you’re in you’re in – regardless of whether or not you have a reservation. As long as you pay to extend before checkout you’ll never have to leave. How do they do it? Well, the flip side is that you can almost never determine future availability: if you go to a guesthouse and ask about the following night, they’ll tell you “we don’t know what’s available because we don’t know who’ll leave – come back at noon tomorrow and see.” Some travelers might not like this, but I find it incredibly convenient; it caters perfectly to my freeform-style of travel. Getting bored of a place? Just pack up before noon. Feel like another day of sightseeing? Just head downstairs and plop down some cash. You never have to plan ahead and are free to stay exactly as long (or as short) as you like. And because accommodations are so plentiful, even during peak season there’s little need to worry – just walk in at noon and someone will almost always be on their way out. Sure makes freeform travel easy! 🙂 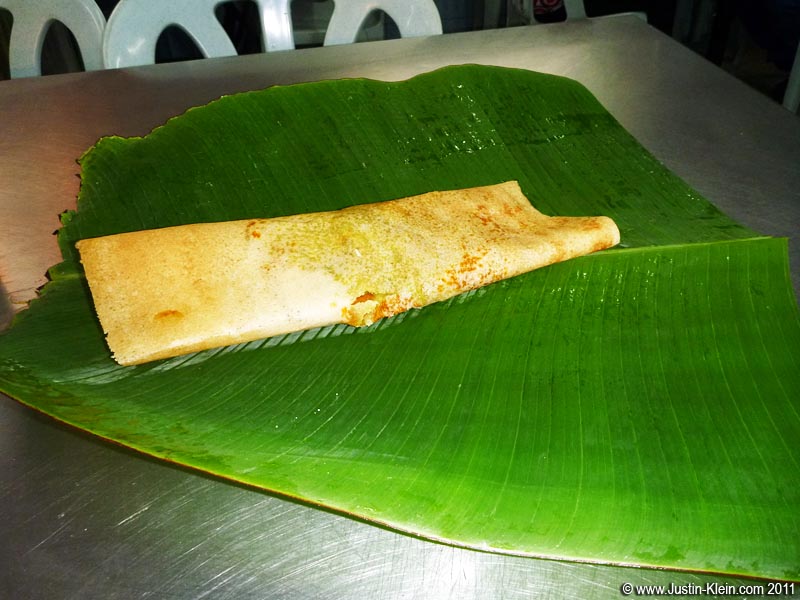 This Mutton Thosai was purchased not by choice – but because it was the only item they actually had available. Good thing it tasted awesome : )

• Many restaurants in Malaysia – despite having extensive menus – seem to constantly be sold out of everything. I’ll often walk in and order something, to which they’ll reply “finished.” “I’d like Chicken Tikka Masala, please.” “Chicken finished – now only mutton thosai.” They’ll have 20 things on the menu but only one you can actually order!

Fresh fruit juice: a repeated photo, but too delicious not to include.

• Penang has fresh fruit juice stalls everywhere. Melaka has none. Weird. And even worse, virtually none of the juice in Melaka’s stores is even juice at all – it’s always that Water + Sugar + Concentrated Syrup crap. Double-weird. I miss my tropical fruit juice 😛

A family of tourists negotiating with a trishaw driver in Dutch Square, Melaka.

• Many places have their own unique forms of transport: Thailand has tuktuks, Venice has gondolas, Japan has bullet trains, Egypt has camels…and Melaka has trishaws. Trishaws are a sort of three-wheeled bicycle unlike anything I’d ever seen. Since they did such a good job, I’ll leave the description up to Lonely Planet:

“These [trishaw drivers] seem to be competing for who can bedeck their vehicles in the most outrageously kitsch plastic flowers, semimacabre baby-doll heads, religious paraphernalia and tinsel. Add some flashing Christmas lights, a satin parasol and a sound system and you’ve got one proud peddler. While taking a ride in one of these things is the most high-profile ‘I’m a tourist’ things you might ever do outside of Disneyland, it’s an unabashed hoot and is great support for an industry that is dying nearly everywhere else in the country. As a spectator, keep an eye out for big tourist groups hiring out trishaws en masse: the effect, with several ’80s dance hits blaring at the same time, cameras snapping and all that glitzy decoration, turns the streets of Melaka into a giant circuslike parade.

• Yay for the influence of Middle Eastern culture! Ever since Bangkok I’ve been trying desperately to replace my broken Egyptian hookah – always to no avail. Yet it didn’t even take five minutes in Kuala Lumpur. I stepped outside my door and almost immediately walked past a booth selling them in Petaling St. Market – at about 1/10th the outrageous price in Phuket.

Monitor lizards are fairly common in this part of the world, but the only one I managed to capture was this blurry giant off the coast of Phang Nga, Thailand.

• One day while strolling around Melaka, I was startled by a flurry of motion by my feet. It was a giant monitor lizard nearly the size of my arm. He’d been just hanging out on the sidewalk, and when I approached, he jumped up and dove headfirst into a nearby sewer. That was definitely a first.