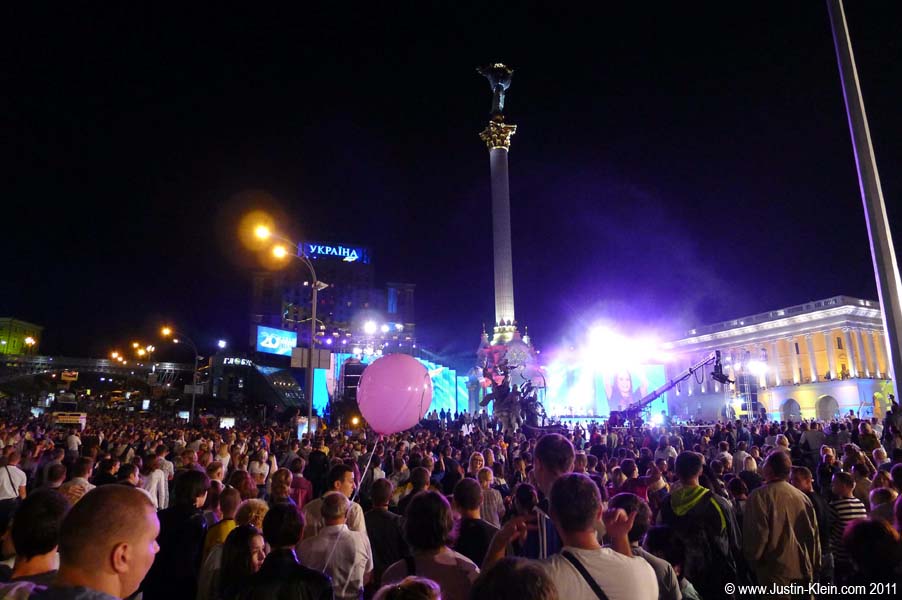 Well that sure was lucky. 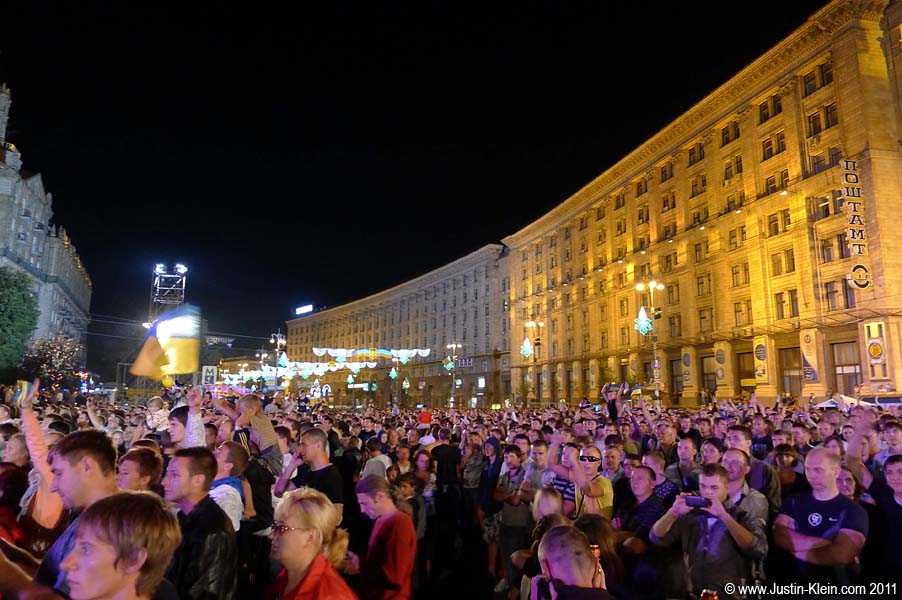 By total coincidence, I just happened to arrive in Kiev on Ukrainian Independence Day – its twentieth!

When our train from Simferopol arrived, Julio was kind enough to let us use his apartment as a base to get settled. Even though we arrived at like 6 in the morning.

Within just a few hours of getting back to Kiev, the rest of my crew – Herb, Gaurav, and Jose – had all packed up and headed off to catch their flights home. My plan was to find an apartment, settle down, focus, and start the daunting task of catch-up work and writing. 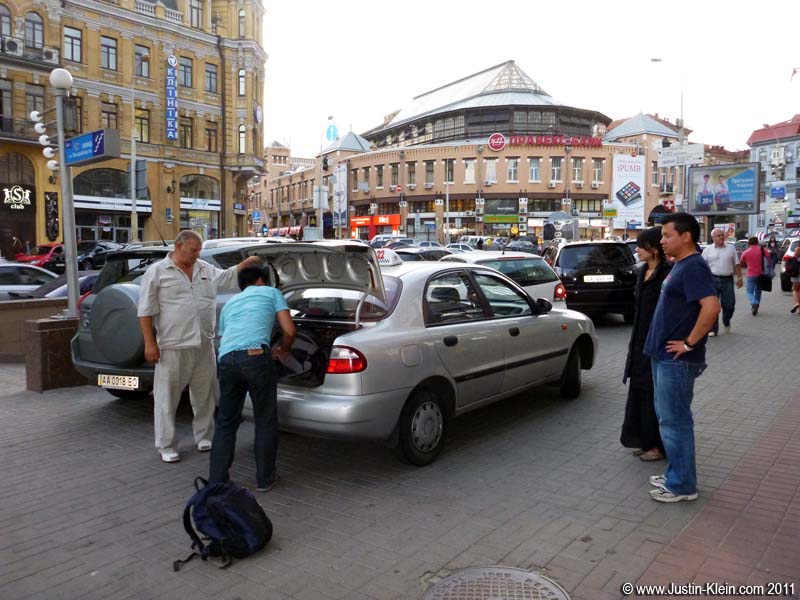 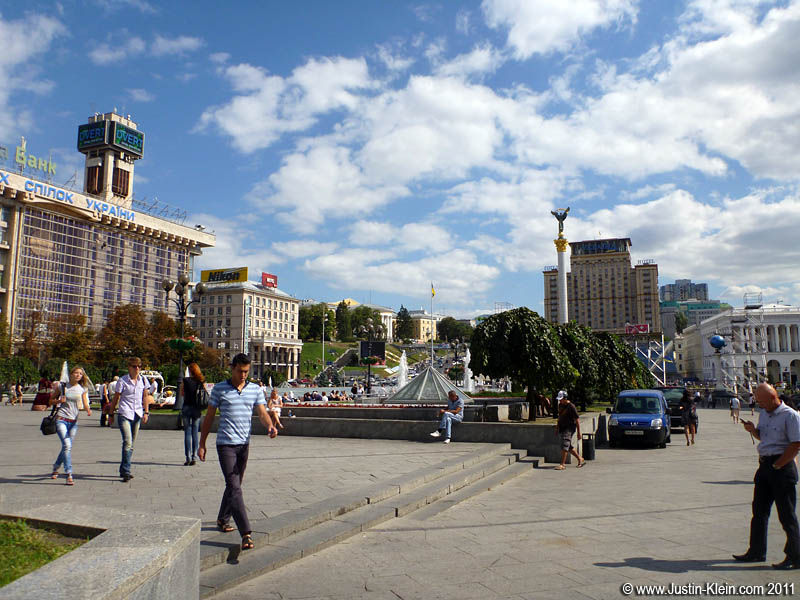 Kiev really is quite a nice city.

And although my original companions may have left, I now had an all new group to distract me: Julio, who’d gotten his own apartment in Kiev for a post-Kazantip week; Jenn, who was going with the flow on her own long-term trip; and Tanya, who calls Ukraine her home. 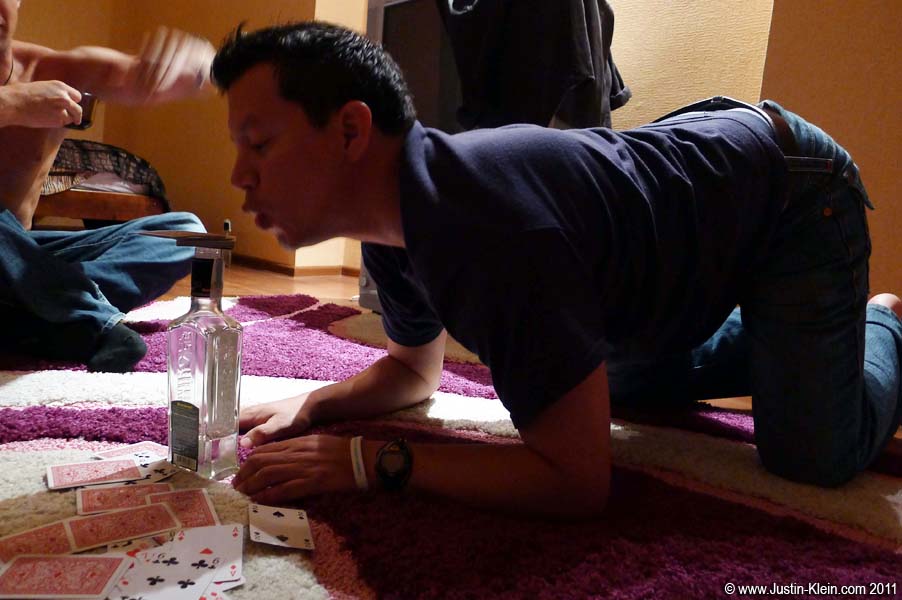 Prepartying with Julio and Jenn before going out for Ukrainian Independence Day. Here, I’m teaching them a drinking game that I learned during my very first month in Japan – mentioned in one of my earliest blog posts. See www.justin-klein.com/post40.

(Side note: Julio. I still just can’t comprehend that guy. He’s 38, easily as big a party animal as me, goes to huge festivals on the other side of the world totally his own, stays awake about 24hrs a day, and yet he’s always social and in a great mood. Seriously, one of the most fun and amicable guys I know. Most people say I’m young at heart…but they’ve clearly never met Julio.)

The livingroom of my Kiev apartment.

Anyway, as Julio already had his apartment sorted out we headed straight there from the train station, using it as base for day one. Tanya was kind enough (surprise, surprise!) to help Jenn and I find a spot of our own, which ended up being a one-bedroom about 5 minutes from Libidska Metro. 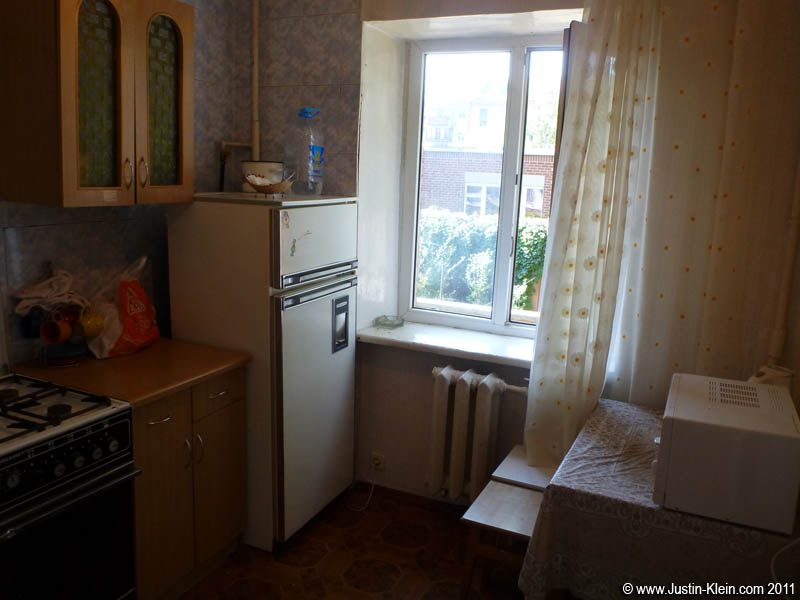 SO nice to have a kitchen – and a supermarket right across the street!

At only 25 euros a night the price was sure right, though I must say it wasn’t the most luxurious place I’ve ever lived.

And damn…no WiFi. Looks like it’s 3G tethering for me 😛 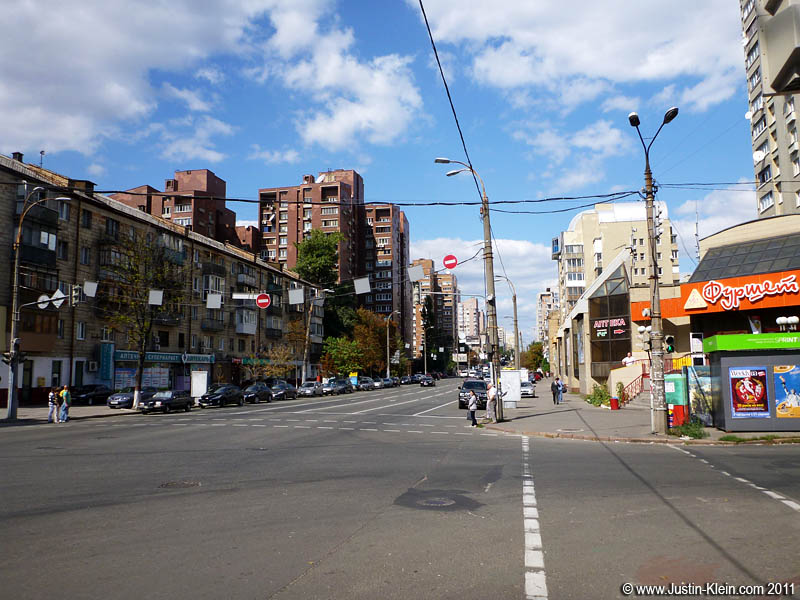 I lived in the building on the left, and the market is on the right.

The first few days I spent hanging out with Julio and Jenn – wandering around town by day, clubbing by night. As they were both leaving in just a few days and I had no idea when I’d see them again, I figured I could justify the delay.

A pleasant day wandering around Kiev with Jenn and Julio.

Then when they took off, I was presented with a dilemma: what to do next.

Isn’t he a bit young for a cop?

Although I did finally have an apartment to myself, there were a few issues that made working in Kiev less than ideal – like the lack of WiFi and the unavailability of what I’d consider “good private accommodations.” My apartment was alright, but $30/night is more than I usually like to spend long-term. Plus it didn’t even have AC or screens on the windows; something like that would’ve easily been $50 or more. Julio was paying $80 for his place. I guess Eastern Europe isn’t quite as cheap as it’s cracked up to be (and certainly nowhere near SouthEast Asia). 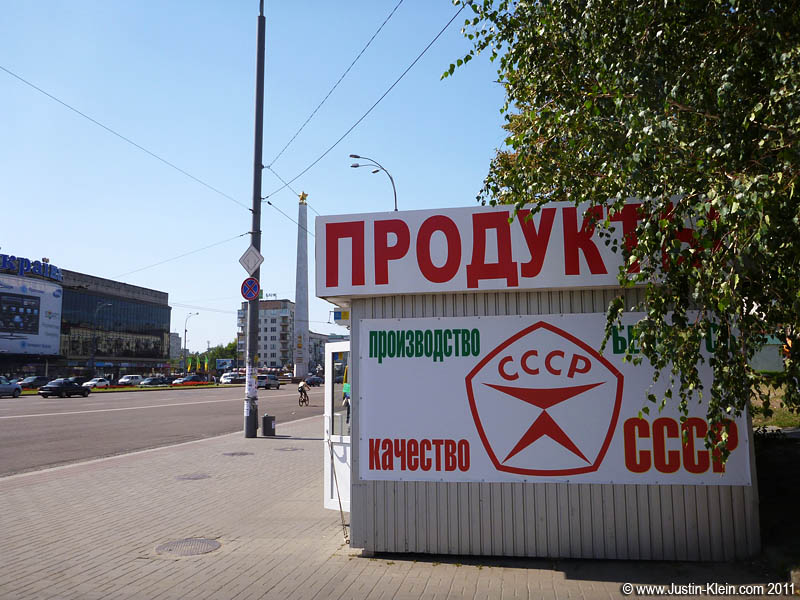 So I decided to spend just a few more days in Kiev wrapping up the essentials, then catch a flight onward. 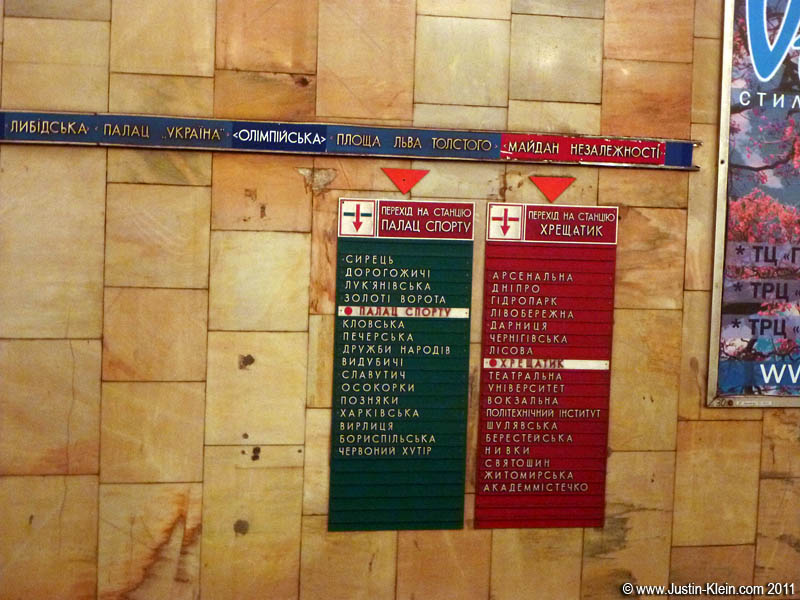 My first time in Ukraine, I relied completely on Peder to get around – but this time I actually took the time to teach myself Cyrillic. It was so incredibly worth it. Virtually nothing in Ukraine – even the signs in Kiev Metro – are romanized.

In total I was there for a week, mostly just “living my daily life:” shopping at the supermarket, cooking my meals, jogging and exercising, catching up on the mess of e-mails and bug reports and photo organization, etc. 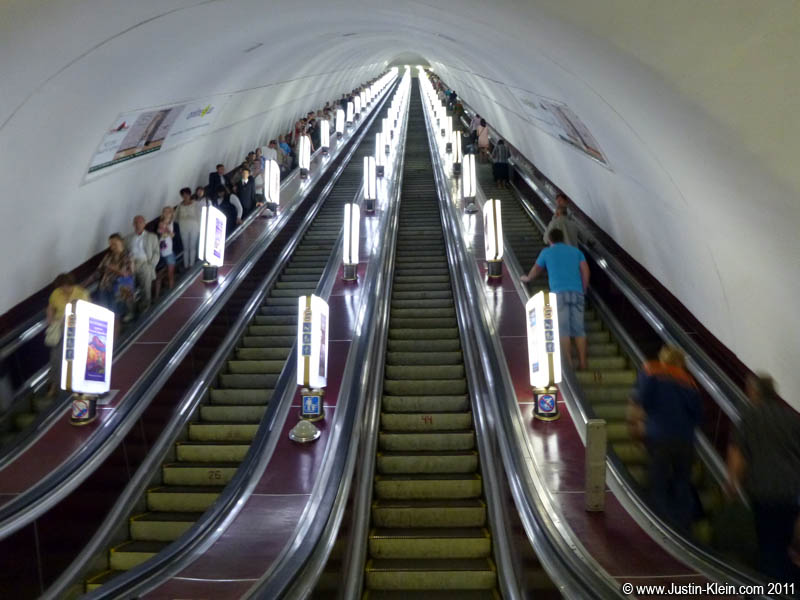 …And speaking of Kiev Metro, geez is it ever deep! This is just one of several escalators that seem to go on forever.

Then when my time was up I hopped on a flight to Belgrade. 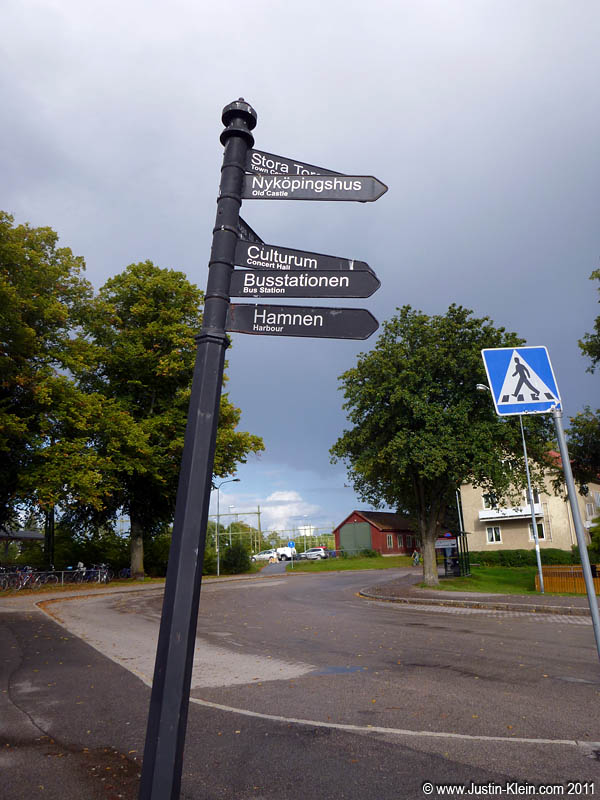 Note: These posts are behind realtime; the above took place in August, 2011.

9 Responses to “Life In Kiev”