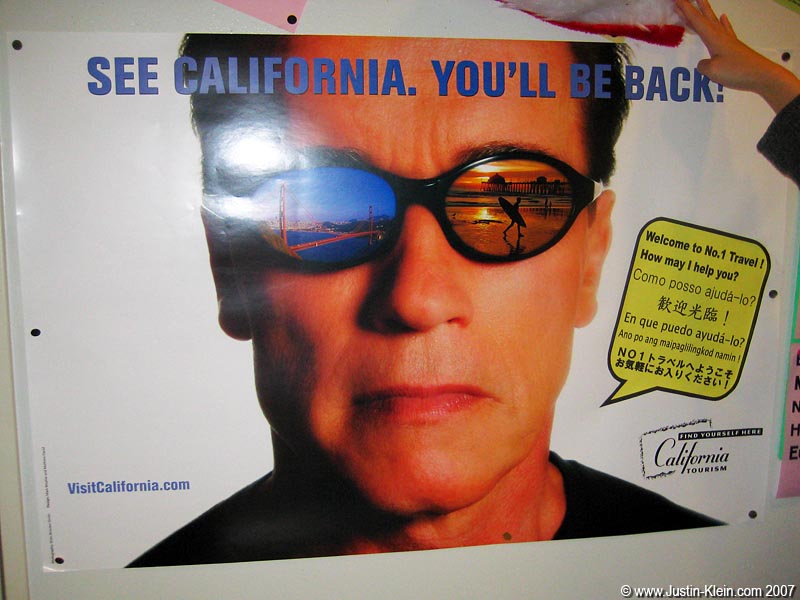 A poster on the front of a travel agency…

While I was off in Kyushu working for Dean and soaking up minerals from the Island’s many Onsen, Peder decided take a quick weekend trip to Korea. Our plan was to meet back at his place on the last evening of my railpass’ validity, one week before departing for Tokyo and then home. But since I’d decided to return to Kyoto a day early, he wasn’t back yet – and I had no way of getting into the apartment. I scrambled to contact everyone I knew, asking for any small bed or sofa to call home for the night.*0

Luckily I found one, and early the next morning I was right back on the road. 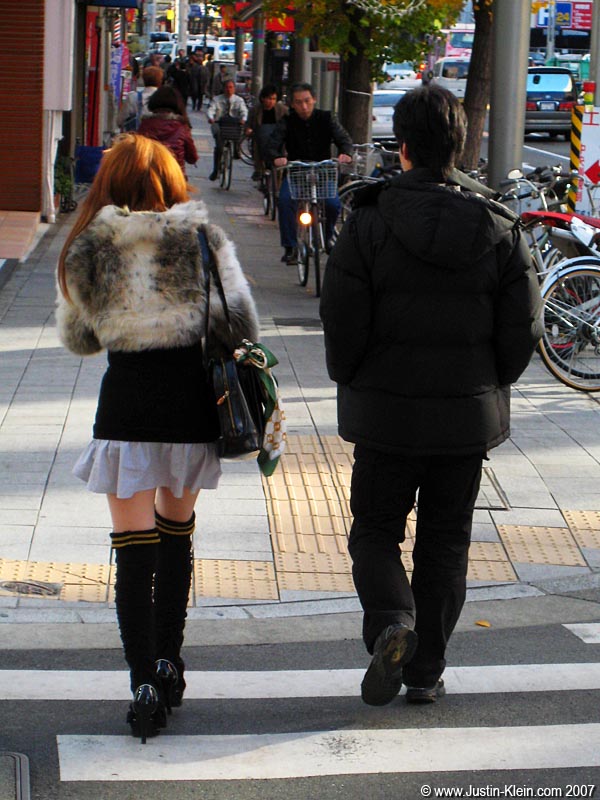 I decided to kill my last day of free-travel with a short trip to the only major city in the area I’d never visited: Nagoya. As luck would have it, an old friend from UCSD had just moved there to start a job as a NOVA English teacher. We met up for the first time in almost 3 years and shared a leisurely sushi lunch with two of her roomates.

I returned to Kyoto that night, and with just a handful of days left in Kansai, it was time to start saying my goodbyes. Without even going home to change I went straight from Kyoto Station to meet Kusunoki Sensei; we ate at Chikyuuya, one of my favorite Izakaya. Then I moved on to Starbuck’s to see Mike and Andrew. And finally back to Peder’s to sleep.

That was one uncomfortably cramped room. 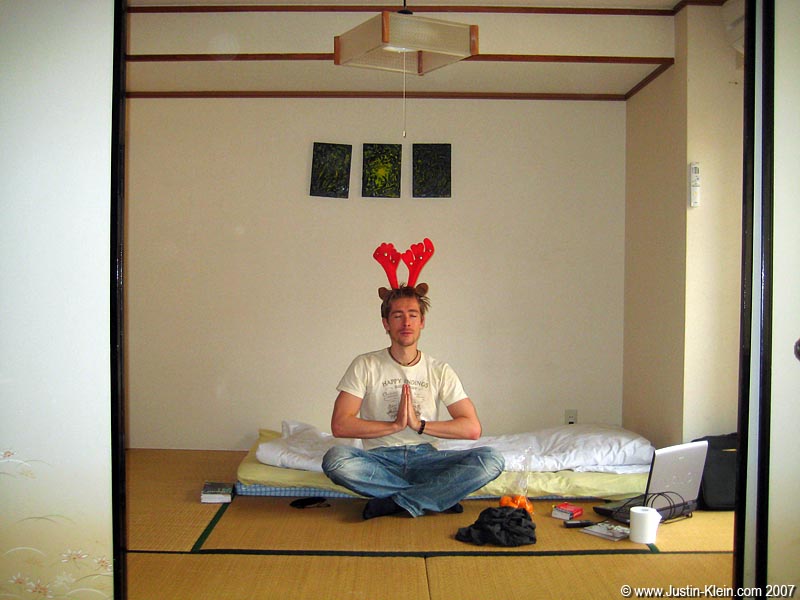 Peder meditating with his antlers in our new home.

The next morning we decided that our original plan – to have me crash on his floor for the next five days – wasn’t such a good idea after all, so we asked the building’s manager if he could move us into a two-bedroom apartment. It violated some rule or another so he refused, even though one such room was completely available and he’d be making more money by moving us there.

Japan and its rules 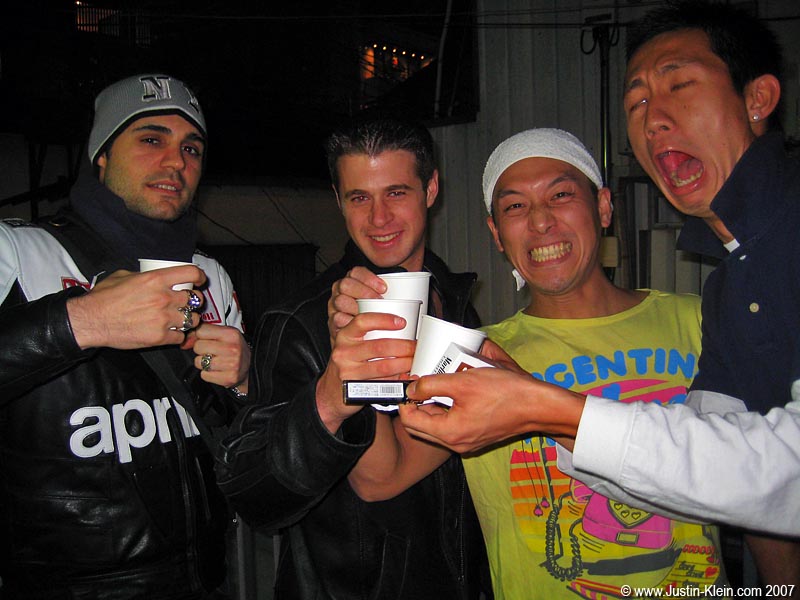 Stefan, me, A-Bar’s manager, and Big Kosuke. The manager was nice enough to bring out a pile of free beers in honor of my departure.

Thankfully, after a bit of creative thinking and calculations we were able to convince him, and the two of us quickly transferred everything downstairs to our new short-term bachelor pad. 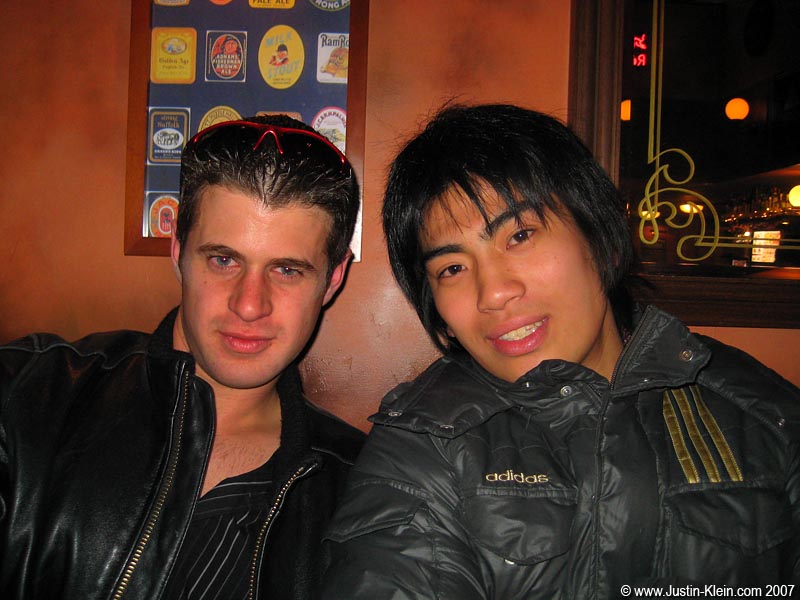 The next five days were a flurry of fun, excitement, and emotion.

…But due to time constraints, I regret to say that I’ll have to leave the details to your imagination. Here, I’ll only briefly summarize each of my remaining nights in Kyoto:

Friday we hit A-Bar with Stefan and the two Kosuke’s, then moved on to Hub with Nakanishi*1 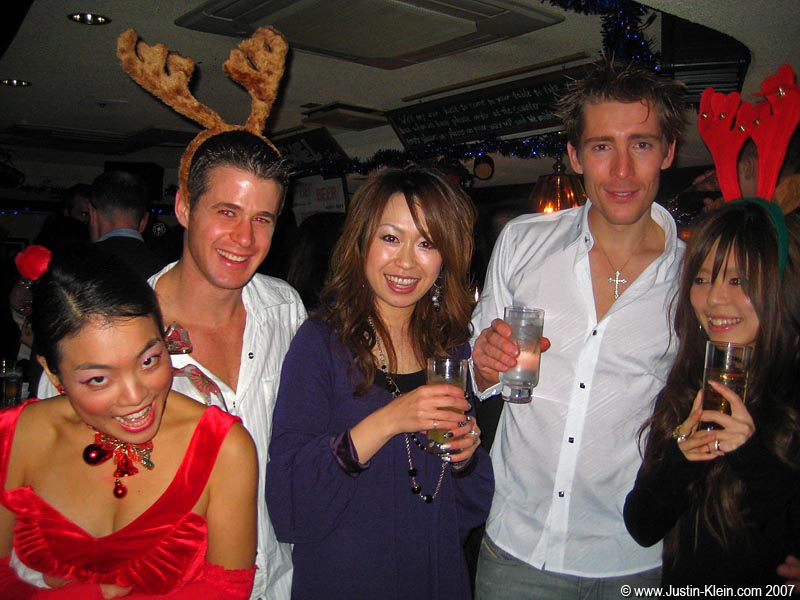 Peder and I at the Christmas WhyNot Party. 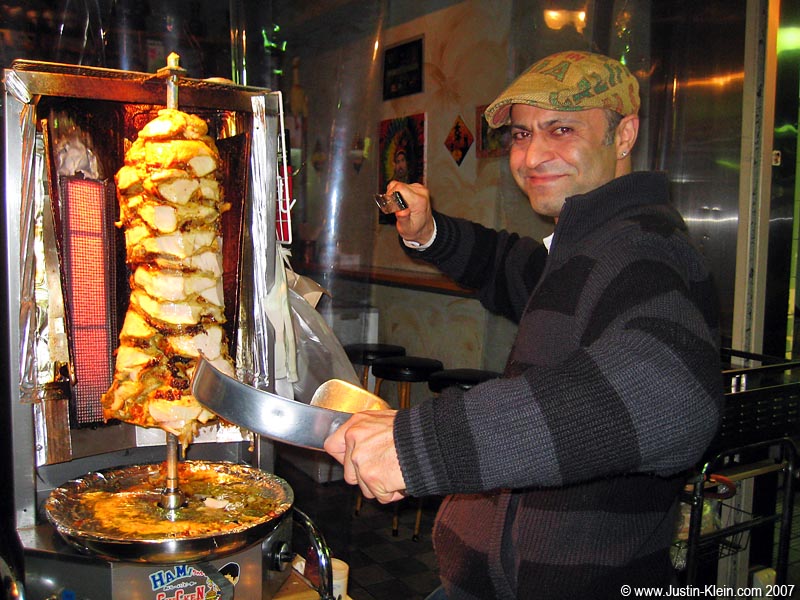 Serving up one last Hamid Kabab, my favorite late-night snack on Kiyamachi. 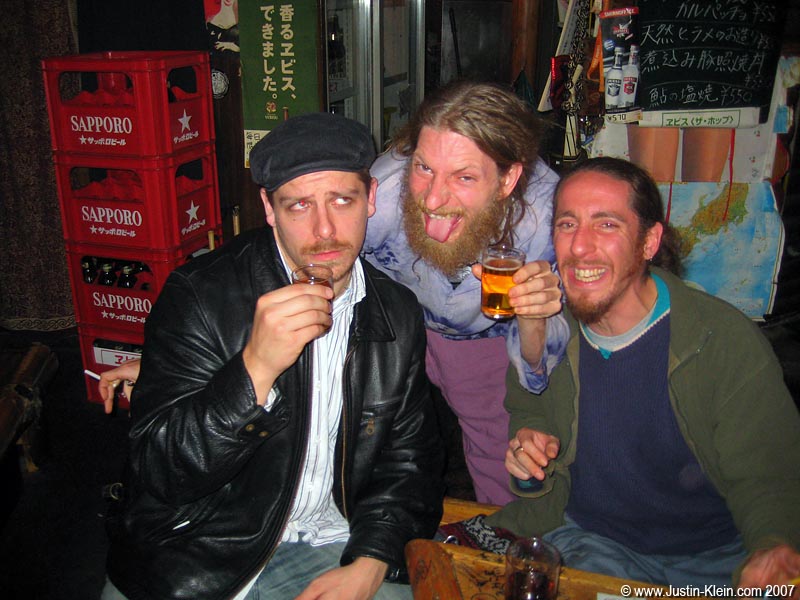 Tony and the two Kyoto Hippies, Eric and Chris.

When it closed at 6am I continued to Nikki’s Bar. Nikki was a bit upset that I arrived so late because he’d been wanting to throw a going away party, but I apologized and told him that I’d do my best to make up for it. I hung out there chatting with Matt and Suriya before napping on the pillows until around 11am.

The next day was spent recovering and strolling around downtown with Peder and Tony. 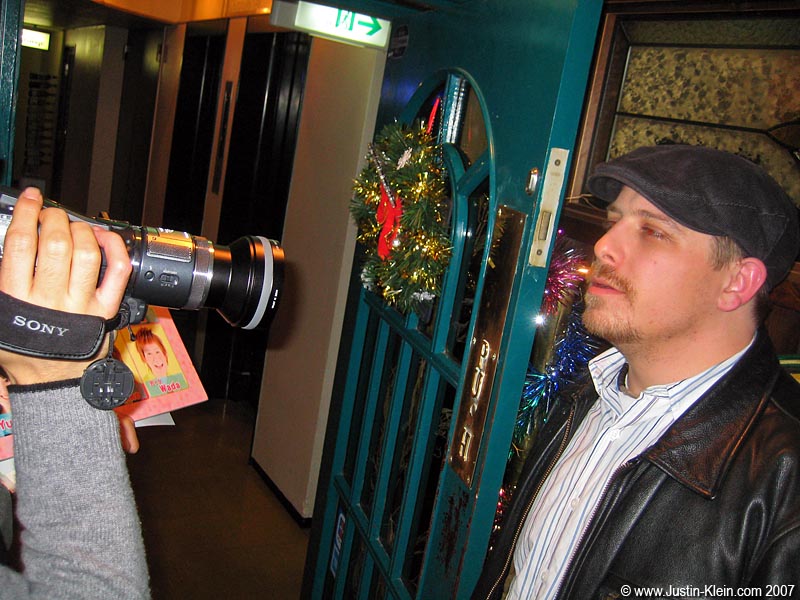 Tony being interviewed for Japanese TV.

Tony is, in my estimation, the King of Osaka. Anywhere he goes, any night of the week, he knows everyone. He’s got connections in every club and bar from Umeda to Shinsaibashi. His 関西弁 is flawless. Even when I ran into him at Suma he was chatting about personal stories with half the people there. And you know, despite this being only the 4th or 5th time we’ve hung out together, I felt like we really bonded. Both of us felt quite sad that we didn’t have the chance to hang out more often while I was here. 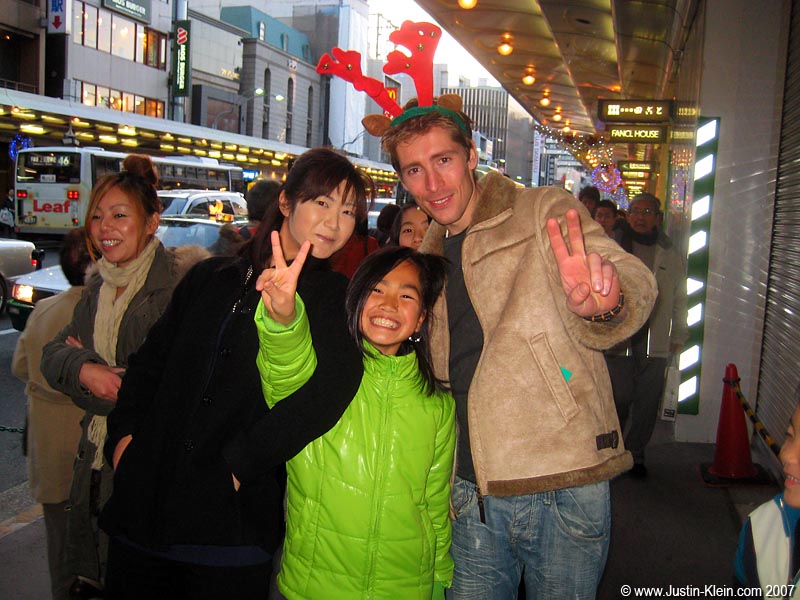 A really cute and utterly un-shy little girl who came up to joke about our antlers on Shijo-Doori.

The following few nights Peder and I broke apart our usual duo to spend time with our more personal friends; having dinner with M., watching movies with Hero King, and slowly preparing to move out*4 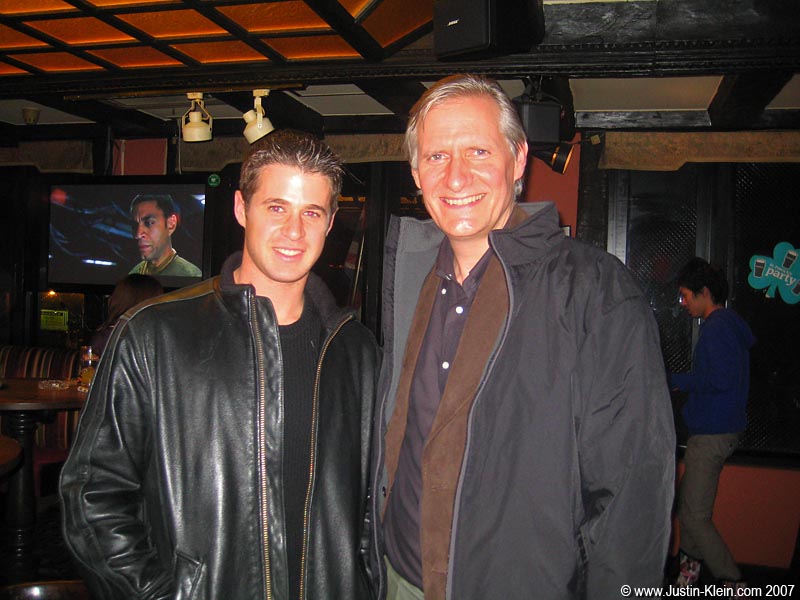 Mike, one of the pillars of Kyoto and an all-around super nice guy. If you’ve ever spent more than a week in the city, chances are you’ve seen him around.

I also arranged to meet Mike for one last beer at the Pig & Whistle. I’ve seen Mike hundreds of times during my stay in Kyoto, but this was the first time we’ve ever made a plan specifically to meet – just like M., the night before. Mike has been a part of Kyoto for the past eight years; everybody knows him. But after nearly half a decade of debate, he’s finally settled on moving to Thailand. He may not be here when I get back, and the city truly won’t be the same without him.

That’s why I really felt honored at Mike’s expression of sadness that I’d be leaving. He told me that over the past few years, all of the long-term “fixtures of Kyoto” seemed to be moving away, myself included. Somehow it was nice to feel like, at least in Mike’s eyes, I’d become just as much a part of Kyoto as Kyoto had become of me.

Up to that particular evening it hadn’t really hit me that I was actually leaving. I’d been so busy traveling, partying, moving, and saying goodbyes that I didn’t really stop and think, “I’m leaving Kyoto.” But today, it hit me. Like a ton of bricks. I was leaving the city that I’d called home for nearly two and a half years, a city where I now had more friends than my place of birth, a city which I’d clearly fallen in love with. It reminded me of the first time I left in 2006, and although this time I didn’t have a girlfriend to say goodbye to, I’d made about two dozen close friends in her place.

I rushed to do the final clean-ups of our apartment and headed back across town to the Starbuck’s in front of Yasaka-Jinja (where I’d coded the vast majority of this website and learned probably half of my Japanese vocabulary) to write one last “Sayonara post.”

That post never got finished. But as I sat there and went through my cellphone’s address book, facebook friends, mixi buddies, and emails trying to remember everyone I wanted to say goodbye to, I simply couldn’t hold back the tears. It was my very last night in the city, and everyone knew it. Over the course of those two hours I started receiving e-mail after e-mail…

“京都駅通る時に、心の中でジャスティンさんにサヨナラ(T_T)するわ“
“Kyotos night is quiet because king of Kyoto is not here (^_^;) I miss you.”
“Whenever you come back, Kyoto will be waiting”

I tried so hard to write that goodbye post, but after awhile I just had to stop. It was too painful – like saying goodbye to a best friend, not knowing when you’ll ever see him again.

I hopped on my bike and headed home, stopping first at Sukiya for a bowl of 牛丼, then at Nikki’s for a final goodbye. It was 7pm on a Wednesday and I wasn’t even sure that he’d be there, but I figured it would be worth a try.

He’d just started setting up for the night.

Nikki and his goodbye gift.

When I told him Peder and I were leaving in the morning, he got right on the phone – and less than ten minutes later a delivery of ten full bottles of tequila arrived at the doorstop. I told him we had to catch a bus at 6am; tonight I was going to bed early. 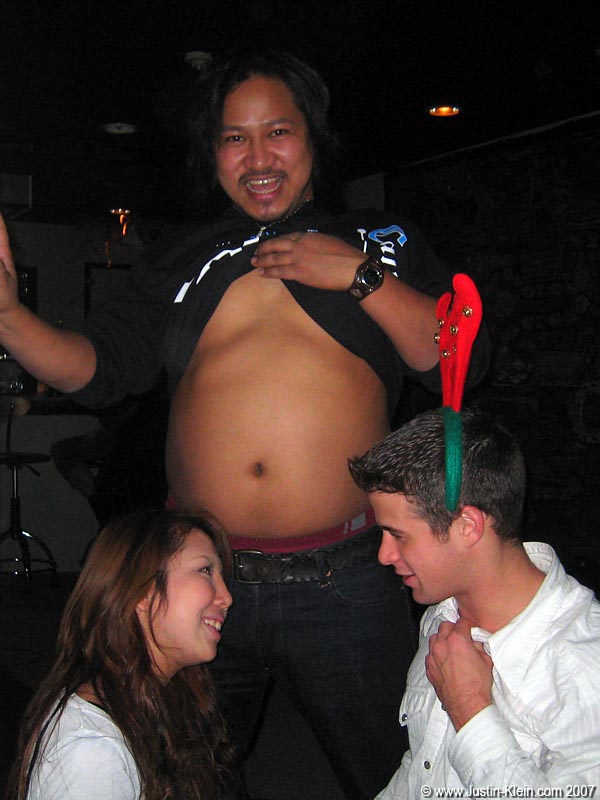 Nikki showing off that impressive bartender-belly behind Natsumi and I.

“That’s BS man, just bring your luggage and leave from here. Bus or not, this is your last night – I am throwing you guys a goodbye party!”

So Nikki’s it was, until 5am when we picked up our piles of luggage, said our goodbyes, and hopped on a bus to Tokyo*5 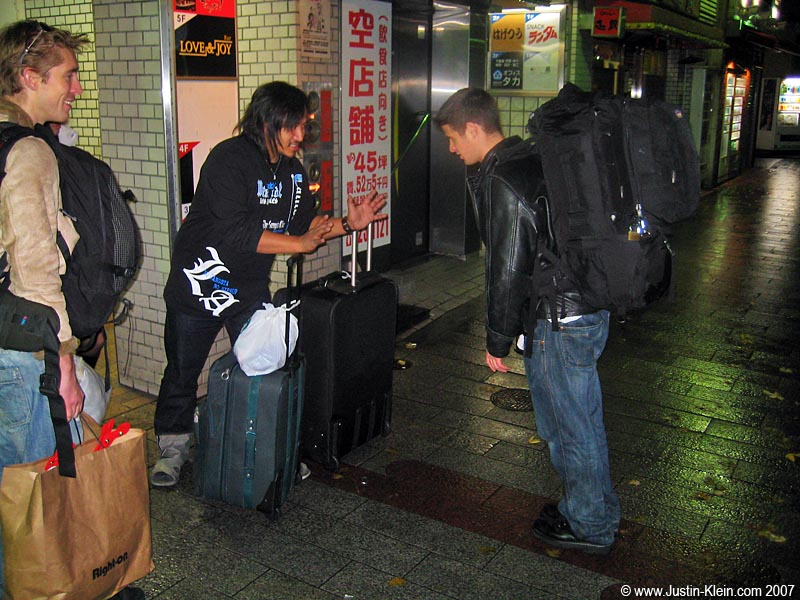 Goodbye, Kyoto. Thanks for taking such good care of me.