Landing in Simferopol at 7:30am.

For its first few years, Eastern Europe’s biggest and most notorious rave was held in an abandoned nuclear reactor somewhere near the Crimean town of Shchelkino. But Kazantip quickly grew beyond control, and the authorities – scared by the volume of people and degree of debauchery – kicked them out. It wasn’t until 2000 that it found its current (and presumably permanent) home in the small coastal town of Popovka. 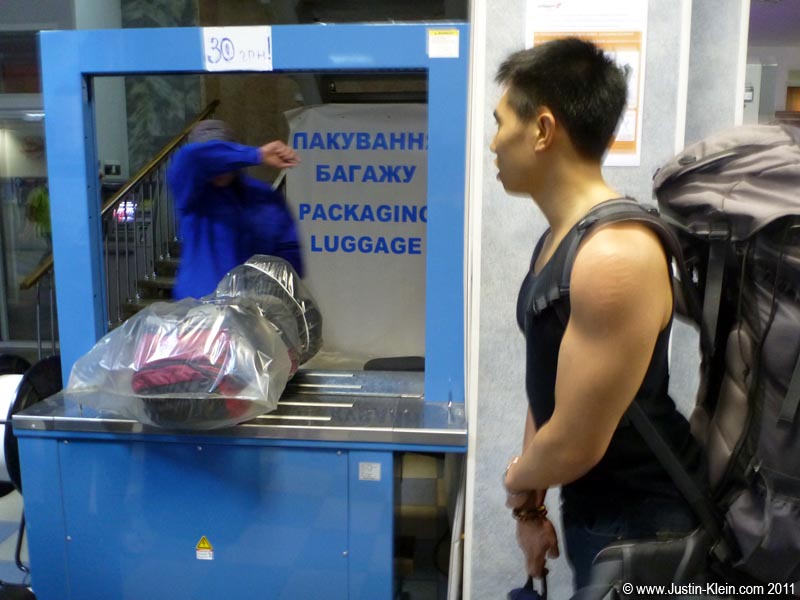 Airports in Ukraine have these “sealing stations” where you pay to have your luggage encased in plastic. Why? Apparently, if you don’t do so the staff is likely to open your bags and steal your stuff.

Popovka is exactly what I envision when I think of an old, Eastern-bloc village. There are unmaintained dirt roads, dilapidated concrete buildings, old Soviet military vehicles and some fairly disconcerting “barracks-like” structures. A most unlikely – or perhaps likely? – site for such a notorious party. 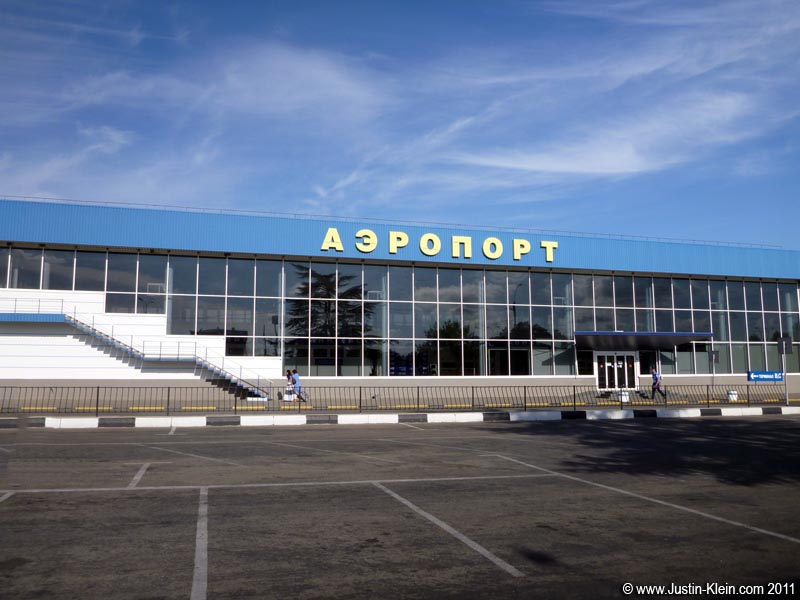 The very “out there” Simferopol airport.

Kazantip was first started in the early 90’s by a man named Nikita Marshunok, a young kitesurfer from Moscow. Today, that man is known as PreZident of a festival that deems itself its own republic. Like a small nation, they have their own “constitution,” their own “viza”, their own “police force” and their own “border controls.” There are “cabinet ministers” and even a “national anthem.”

Baggage claim. I’m not even sure why they bother with the conveyor belt; might as well just let people pull their bags right off the truck!

Born in the ashes of the Soviet Union, Kazantip provided a way for an oppressed people to truly let loose – a place worlds away from the one in which they’d grown up.

Popovka is a long way from nowhere. Two hours in a taxi and this is about all we saw.

Over the years since then Kazantip has grown into something of a legend. A mysterious Eastern European paradise where you can buy beer for 30 cents, spend all day lounging on the beach or all night dancing to Moscow’s top DJ’s. It’s a place where hardened mafia come to enjoy all their ill-earned wealth and where smiling supermodels wander around wearing nothing at all. A place where no one will judge you for who you are or what you do. It’s been called the Shangri La of partying – the kind of place that surely could not really exist. 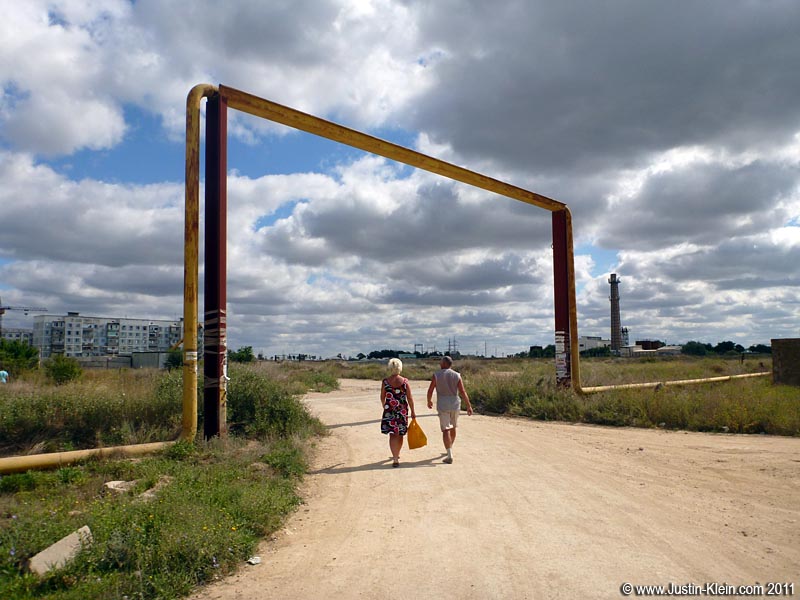 Walking from Popovka to the next town of Mirny.

But it does exist. Which is why I had to see it for myself. 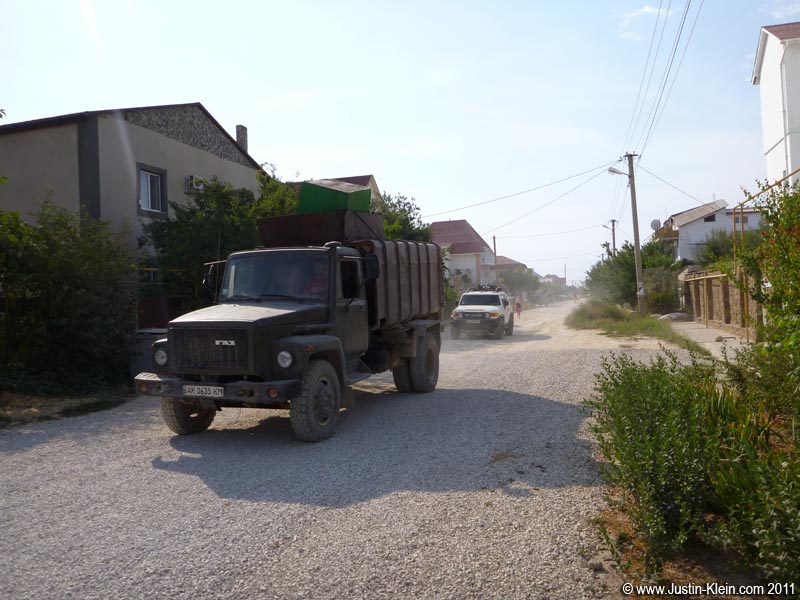 A truly unlikely place to host such a spectacular event.

Our flight from Kiev to Simferopol landed at 7:30 in the morning, and from there it’s a 2-hour drive through miles of absolute nothingness. We kept looking out the window expecting to see something – a town, a gas station, even a tour bus. But no. Just miles of long, empty road.

Hmmm…yeah, something unusual is definitely going on around here.

It wasn’t until we reached Popovka, a town so far-flung that it doesn’t even have an ATM, that we began to see hints of the Great Nation: small groups of oddly-dressed youths all moving in the same general direction.

Herb and Jose heading towards The Republic.

The taxi took us straight to our door. Through a very lucky encounter last year in Kiev, I made friends with a guy named Anton. As a veteran of Kazantip Anton promised to get us a room in the house where he usually stays – and now, just one year later, he’s made good on that promise. He called ahead and booked us a 4-bed “suite” on Morskaya Street, home of some of Popovka’s top-end accommodations. 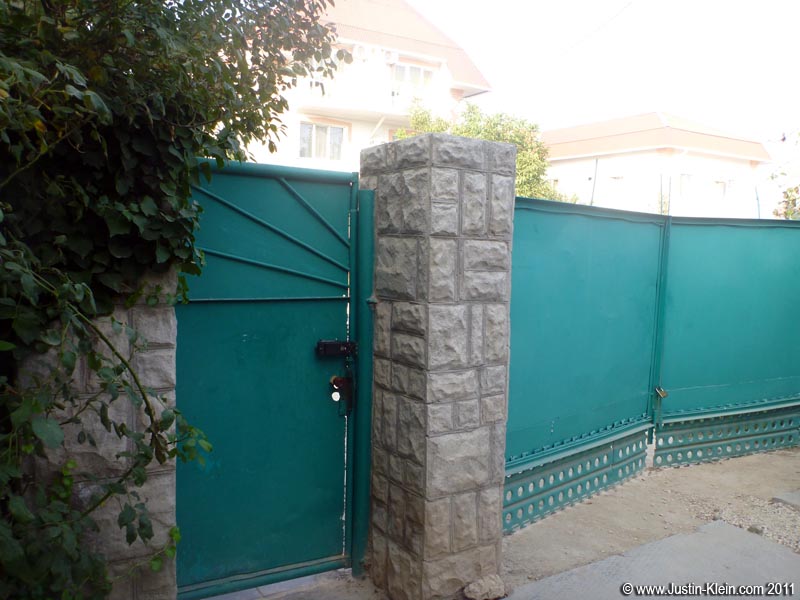 Unfortunately, when we arrived we found little more than a locked metal gate. I called the phone number that Anton had provided but the man on the other end had no idea what I was saying, and with nobody around to translate – our driver included – we were at a loss.

Our 4-person room on Morskaya Street.

But after just a few minutes standing on that dirt road in confusion, the owner luckily turned up by bike. It only took a moment of charades to explain who we were. 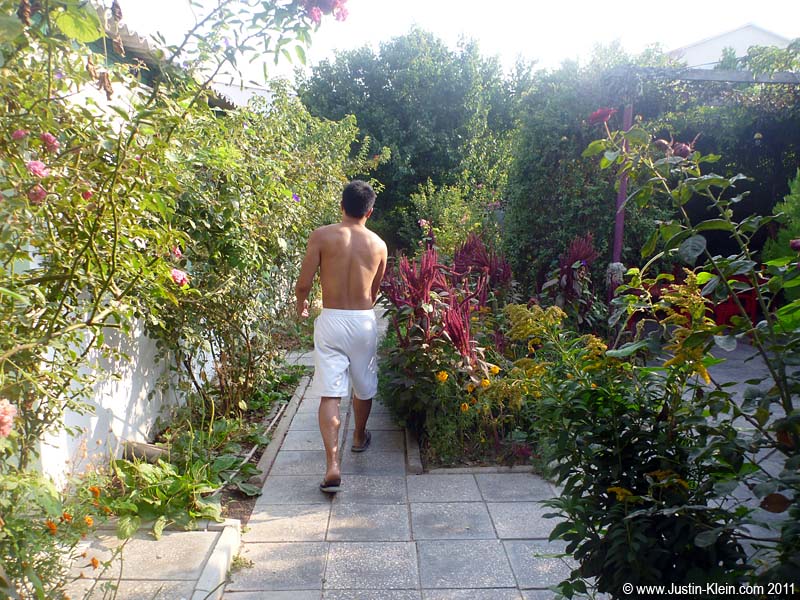 Walking through the little courtyard from our room to the restaurant.

Inside the gate was like a completely different world: a beautiful garden with plants and flowers and well-kept tile walkways, leading to a handful of rooms and even a private little restaurant.

The Kazantip Viza Office. “Real alternative to reality” – I couldn’t have put it better myself.

We checked in, and Gaurav and I walked to the next town of Mirny, home of the nearest ATM. Then we made our way to the border of the Kazantip Republic.

400 euros and two official viZas later, we were in.

Note: These posts are behind realtime; the above took place on Friday, August 5th.

6 Responses to “The Way To Shangri La”