Arriving at the Sea of Japan with my buddy Dokuta.

It’s been a busy month. And a great month. Due in no small part to my recent discovery of The Happiest Place On Earth. No, I don’t refer to Disneyland USA – I refer instead to a little spot just outside of Kobe that goes by the name of 須磨. 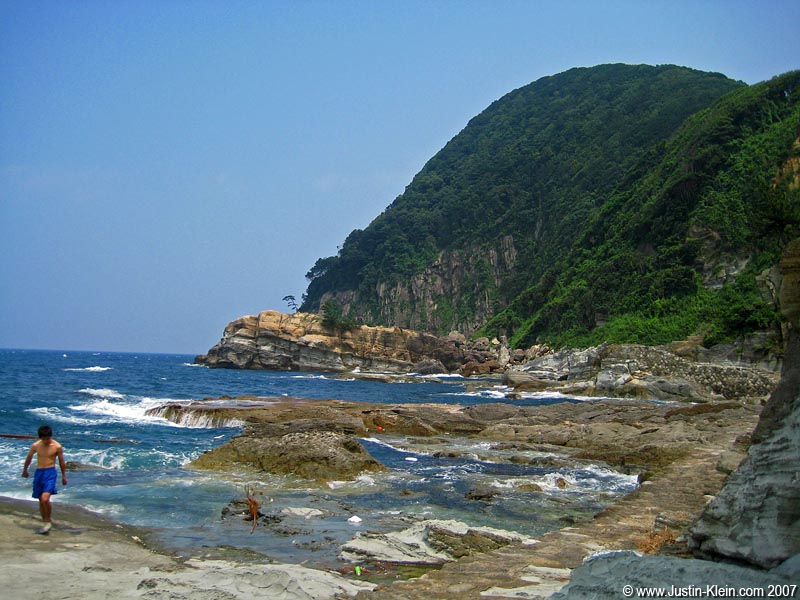 But first, let me go back a few weeks. Since the typhoon season ended in early July, Kyoto has undergone its usual summertime transformation: the cicadas have come out to fill the air with their pleasant (in my opinion) chirping, the typically overcast skies have become as blue as Southern California’s, and the weather has grown hot. Real hot. Thus my strong recent craving for a good swim. 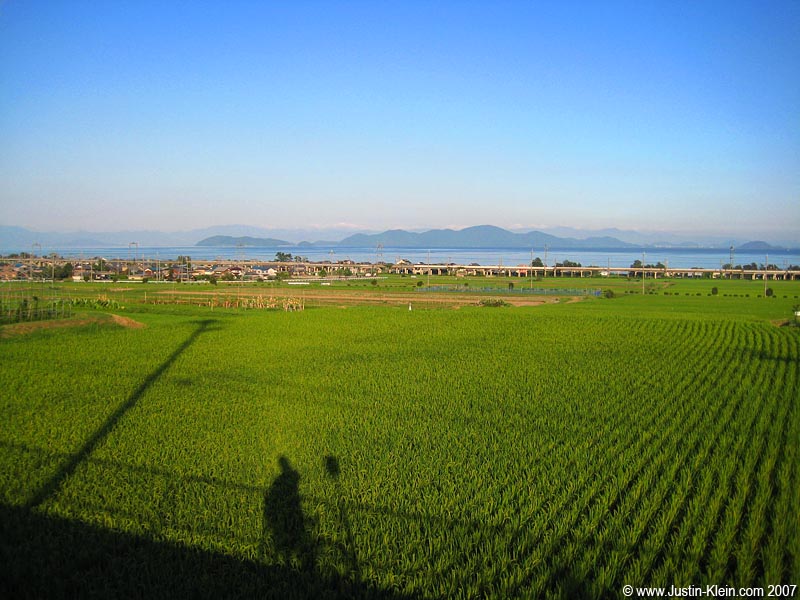 One of the many beautiful views on my long ride around Lake Biwa.

And you know how when I decide to do something, I tend to go a bit overboard? Well, this time I’d made it my personal goal to locate all of the best beaches within a day’s trip of Kyoto. Everytime I met a new friend at a bar, everytime I ran into an acquaintance at Starbuck’s, and everytime I talked to someone with a dark tan, I’d ask “So, where are some good spots to go swimming around here?”

A little fishing village nestled on the Northern coast of Biwako.

As might be expected, this yielded quite a few results. The first of which was the trip to Hodzukyo I mentioned a few posts ago. But Hodzykyo was just the beginning. 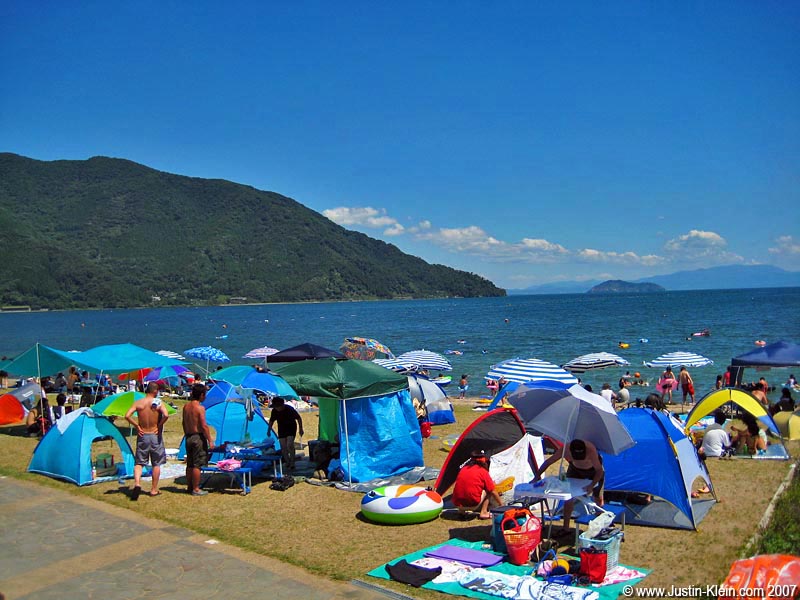 Beach campsites! I can’t tell you how many of these I passed while riding around the lake. If only I’d brought a tent…

I soon learned of a (safer and nearer) swimming hole about four miles up the Kamo River which apparently sports a young and social crowd as well as a nearby waterfall. So during an extended lunch break from work I rode my bike up there for a quick dip. It was very nice, with a small park, baseball diamond, and several BBQ pits…but while it certainly did the job of getting my swim trunks wet, I wasn’t quite satisfied. What I needed was a proper beach. 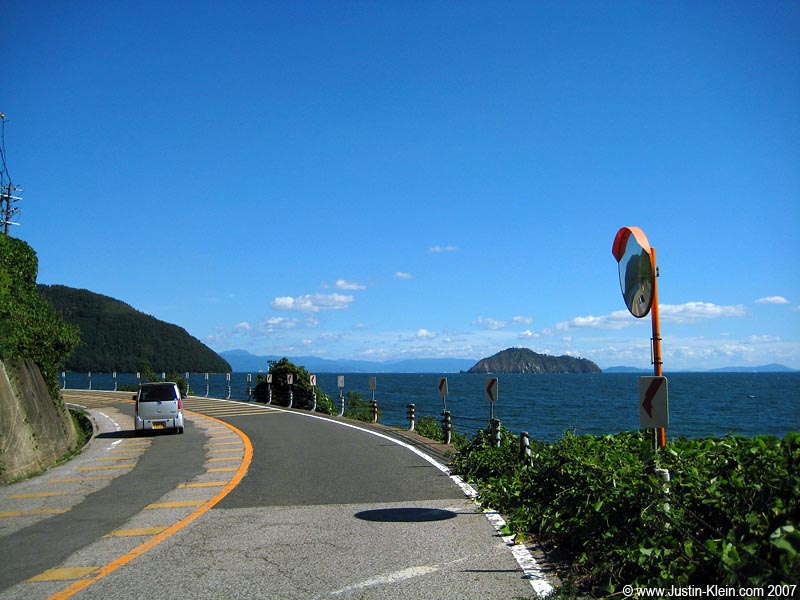 A road on the water.

So a couple weeks later my friend Dokuta and I planned a day trip to the Sea of Japan. He knew of a pleasant spot on a small peninsula in Northern Hyogo Prefecture where it’s possible to dive for shellfish and BBQ them right there on the sand. It sounded great. 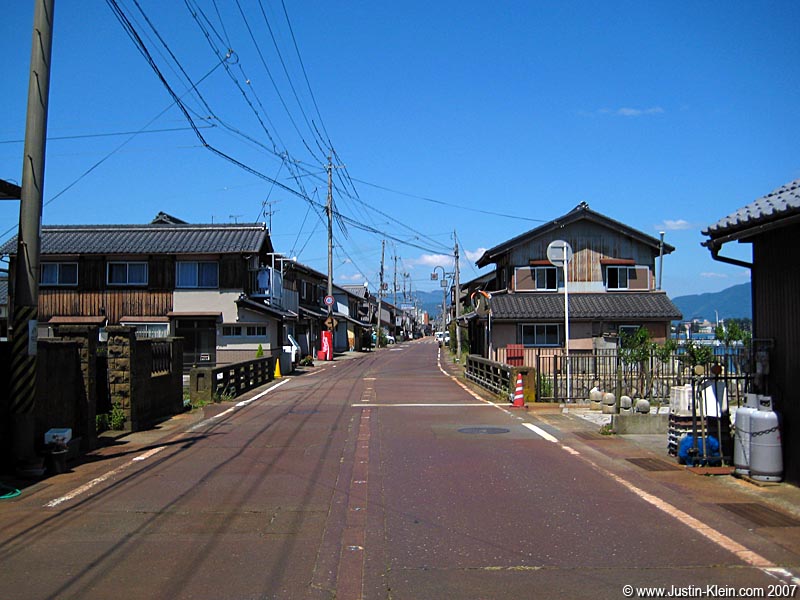 Through another small town.

Except that beach season in Japan is short, lasting only two months or so (between typhoon season and jellyfish season), and we just happened to pick the “best day of the year” to go. A typical 2.5-hour drive ended up taking over 5 hours due to intense traffic, most of which consisted of rental SUV’s loaded up with surfboards and SCUBA equipment. And when we did finally arrive, we found unusually choppy waves making the usual snorkel spot way too dangerous to dive for oysters; instead we just BBQed some 焼肉 which Dokuta had wisely purchased in advance. It was a wonderful day out, and the water was fantastic – literally swimming pool temperature. But still, I was not quite satisfied. 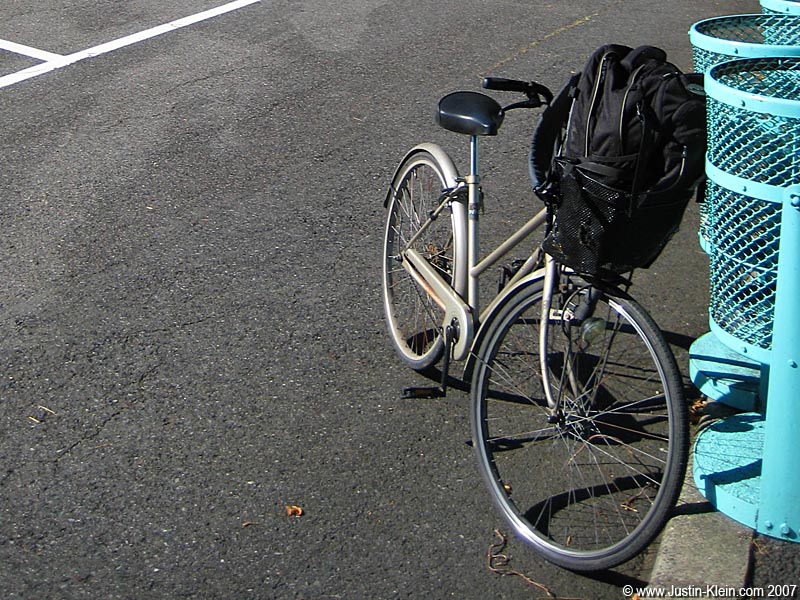 My trusty steed. Not the best equipment one could imagine, but it did get me around and back!

Next it was time for something a bit more adventurous. Ever since my first long-distance bikeride I’ve been wanting to take a trip around Biwako. Biwako is the largest lake in Japan, and the third oldest in the world (~4 million years). It’s also a very popular bike route for outdoors enthusiasts; I’ve been told its ridable in a weekend if you use a decent bike and maintain a decent pace. But I don’t have a decent bike (anyone surprised?). I have a rusty, deteriorating, one-speed granny bike. The rear brakes don’t work at all, and the basket – whose bolts have rusted completely through – is attached only by a series of zip-ties which I purchased at my local 99 yen store. Everyone told me “riding around Biwako on that thing is impossible.” So of course I had to prove them wrong.

The two recent acquisitions that made my summer: a road atlas of Kansai (for long-distance biking) and a waterproof camera case (for Spring Break-brand insanity).

The trip covered over 260km and took nearly 3 days, mostly due to a bunch of stops and detours because of an, erm, digestion problem I experienced during the first day. But it was still the most pleasant long-distance ride I’ve taken to date. Along the way I passed through big cities and small fishing villages, expansive rice fields and tall mountains, abandoned coastlines and lively beaches, bamboo groves and evergreen forests. The weather was deathly hot – often approaching 40 degrees C – and I drank more bottles of water than I can begin to count…but I learned a lot about myself in terms of what makes a good outdoors trip for me. Namely: 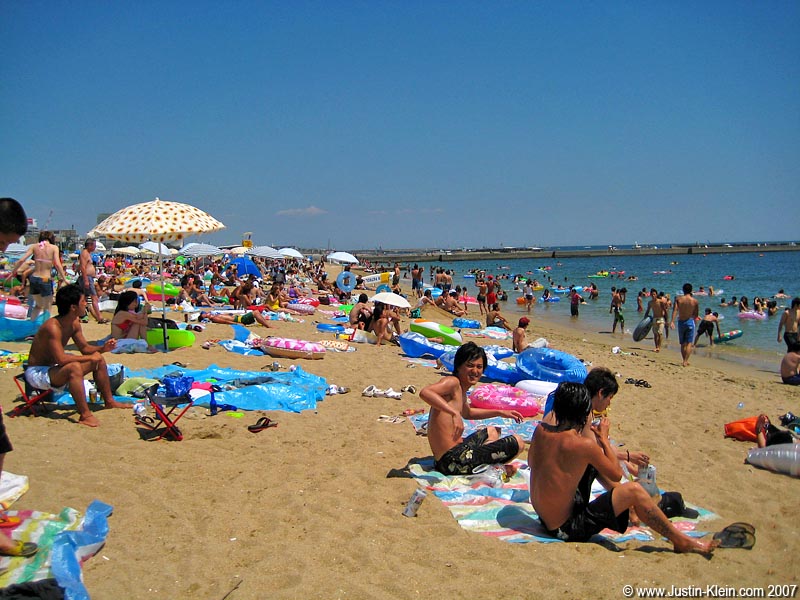 1) I don’t particularly like mountain riding because it’s much, much slower and typically offers less interesting scenery. My favorite thing about travel by bicycle is the huge variety of environments you can pass through and participate in, and by riding on flat ground you can go much farther much more quickly. In the mountains its mostly just dirt and trees for hours on end. 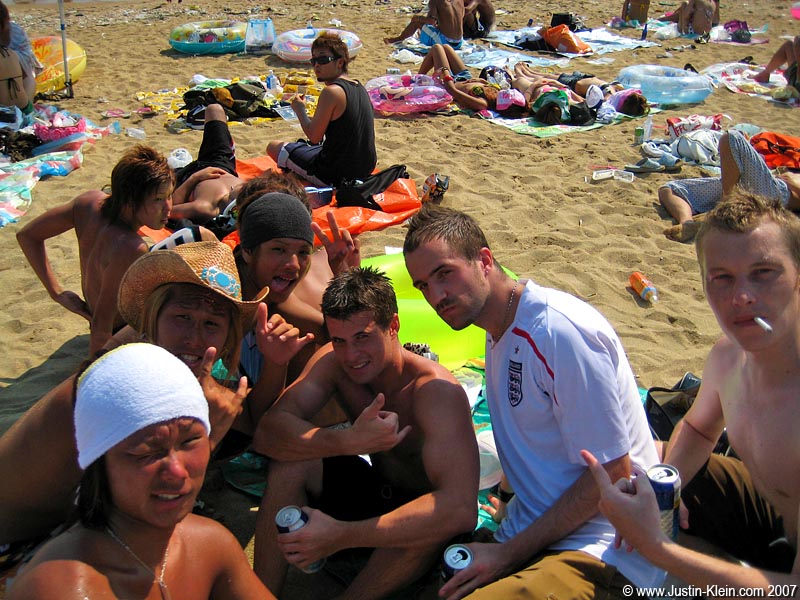 Each time I went, I showed up alone…but it was never long before I found a fun and active group with whom to terrorize the beach until the last train of the evening.

2) Equipment does matter. I really didn’t have a particular problem with endurance; it was the rashes on my thighs, calluses on my hands, and bruises on my elbows (from leaning on the handlebars) that always seem to make me want to end a trip prematurely. With a good bike and some comfortable riding clothes I think I could probably go for weeks.

3) Don’t start a trip with a hangover from Friday night. 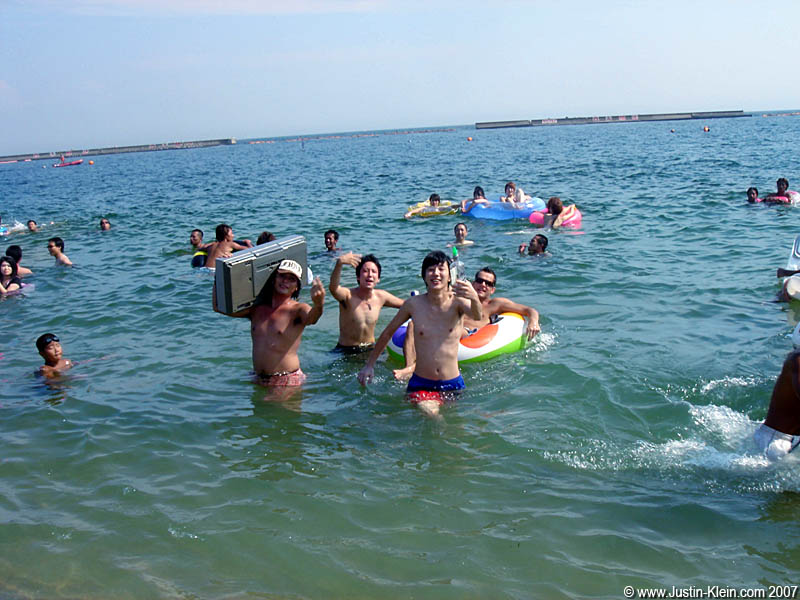 These guys were without a doubt the highlight of the beach. Armed with a giant beatbox, three bottles of tequila, and a crazy foreigner, they managed to gather half the beach’s population to their cause.

One of the most exciting discoveries I made on this trip was a beach called 近江舞子. Or, I guess you wouldn’t quite call it a discovery since one of my motivations for making the ride during the heat of summer was to stop by for a visit…but since I’d never been anywhere like it before, to me it felt like a discovery. 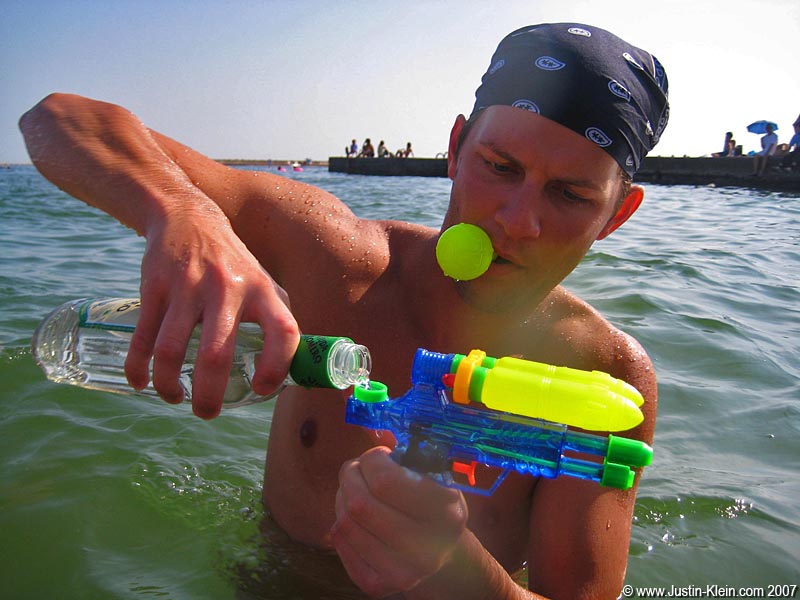 My new Hungarian buddy Laszlo gets creative with his squirt gun. Brilliant!

近江舞子 is a stretch of coastline that has somehow developed into an all-out outdoors party zone. They’ve got everything from party boats to jetskis to people floating in rafts drinking margaritas; on the sand you’ll find BBQs, boomboxes, beer kegs, and tons and tons and tons of beautiful young people, aged 18-29. Oh, and let’s not forget the dozens of tents for everyone planning to keep the fun going all night. Or the minivans lined with sheets and pillows for those who weren’t able to secure a spot on the sand. Yes, during the summer the fun never ends at 近江舞子. 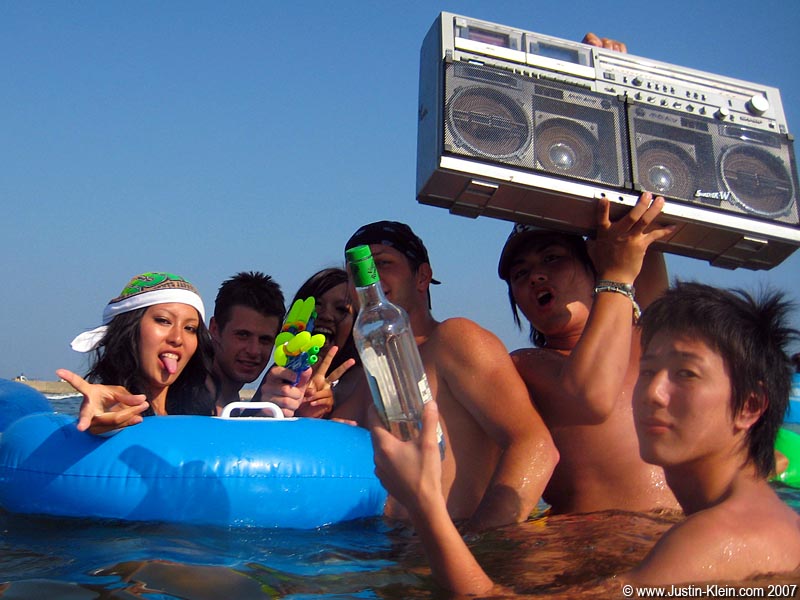 Another incredible weekend in Japan. If only every day could be a weekend…

But wait. It gets even better. Because the following weekend, I paid my first visit to a place called 須磨. Geez, how can I even describe 須磨? To quote another foreigner I overheard stepping onto the beach’s sand for the first time,

“Holy sh**, will you look at this place?? This blows away any MTV Spring Break I’ve ever seen! I’ve officially found my new personal heaven.”

I couldn’t agree more…which is why I’ve been there from morning till night on both Saturday and Sunday of every weekend since first discovering it. 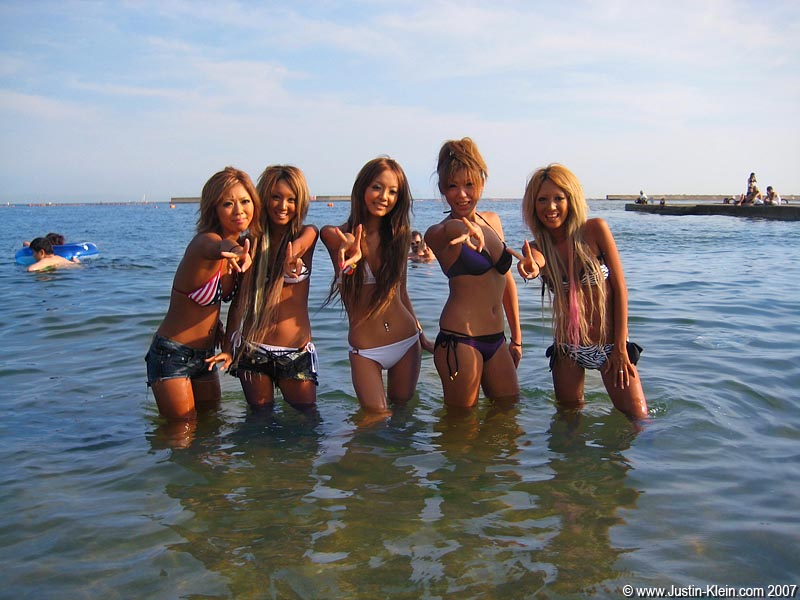 A few of the 須磨 regulars. I guess I must be a pretty noticeable gaijin…because even the beach crowd has started recognizing me:D

須磨 is not clean. It’s not peaceful. And it’s not particularly big. But during the short 2-month swimming season, it’s filled to the brim with young people out for all brands of fun. During the day there are live bands set up at any of the 20 bars and kiosks that line the sand, most of which don’t shut down until well after dark. On weekends they have all-night raves right on the waterline. You can swim, drink, read, jetski, or just sit and watch the dolled-up girls repelling hoards of Japanese guys moving from towel to towel trying to secure a perfect-10 girlfriend for the evening. Many people don’t even go in the water; they get all made up as if they were going clubbing and spend the day socializing on the sand (Reminder: Even guys in Japan often do their hair and make-up

Can you believe no one in Japan seems to know how to chicken-fight? Laszlo and I made short work of that little deficiency!

But by far the coolest thing about 須磨 for me has been all the new friends I’ve made. Even though I show up alone each day, it rarely takes more than an hour or two before I’m laughing and drinking ice-cold チューハイ in a group of 20, doing backflips off the pier for the laughing amusement of the locals floating in their intertubes nearby.

Even the four-legged lifeguard managed to make a couple new friends.

Just last weekend I met a group of guys who were walking around in the water with a giant beatbox pouring tequila shots in peoples’ mouths (see photos); We joined forces and before long half the beach’s population was part of our (not so) little party. 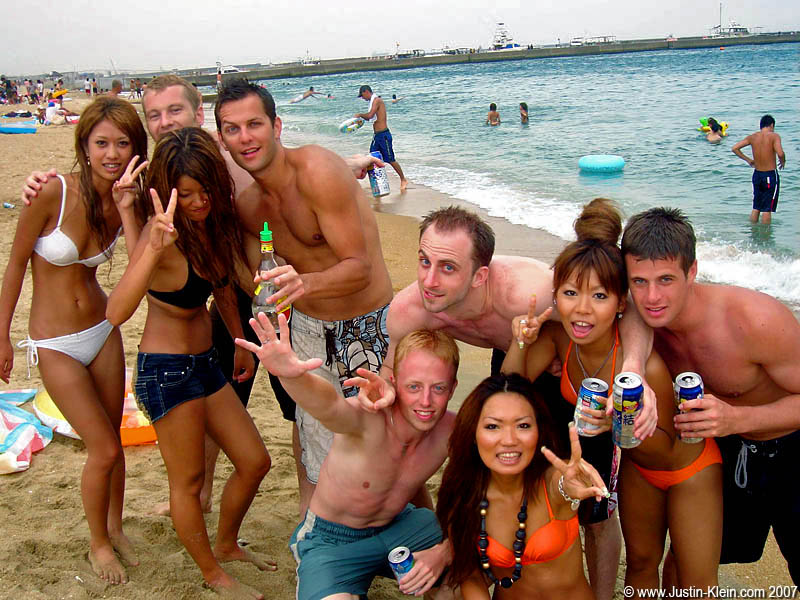 It was a great summer…just 11 more months till the fun continues!

Yep, it’s pretty safe to say that I love 須磨…and that I’ll be back on the first day of Beach Season, 2008.