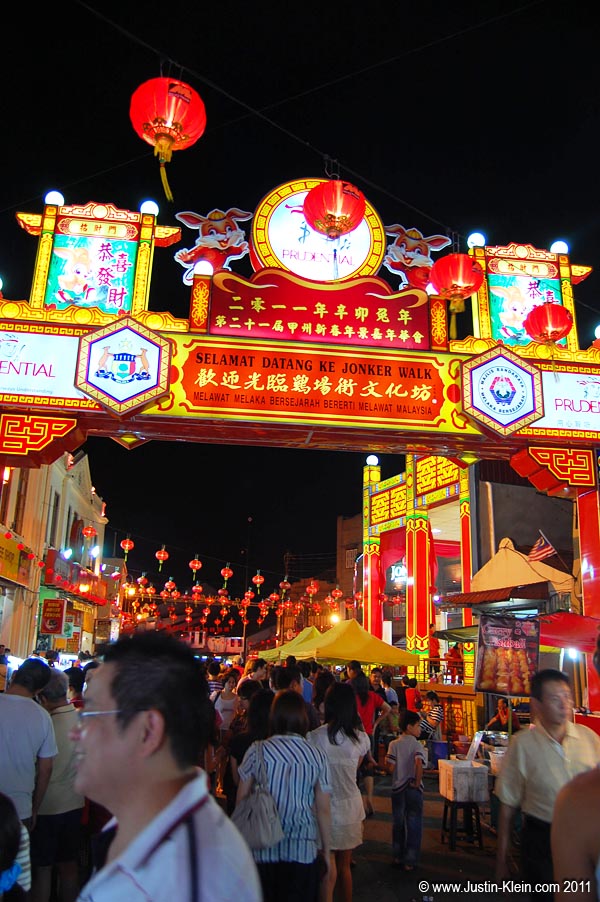 Right in the middle of the bustling Jonker Walk Night Market. Most of these photos were taken over the following few weeks, under nicer weather.

While first planning this trip back in November, I made just one note in the Melaka chapter of my Lonely Planet: “make sure I’m here on a weekend.” For among all of its cultural and historical sights, Melaka’s single most famous attraction – its “absolutely can’t miss event” – is the weekly Jonker Street Night Market. 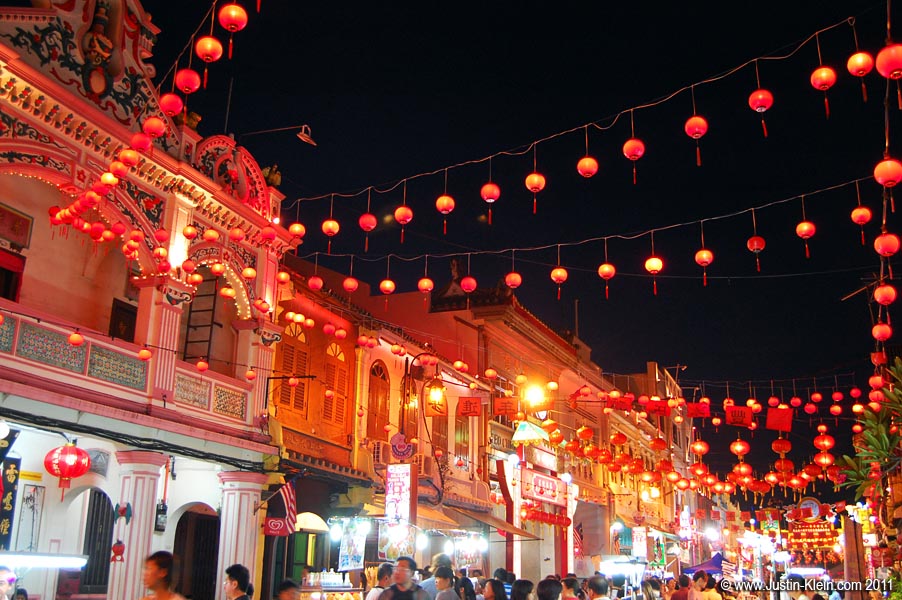 Pretty, isn’t it? Would it ruin the vibe if I told you they were blasting “Dynamite” by Taio Cruz? (Really, they were!)

Jonker Street (also known as Jonker Walk) is a smallish road through central Chinatown, which on Friday and Saturday nights turns to something of a street party. Packed to the gills with all manner of wacky performers, cultural shows, street peddlers, eateries, bars, handicraft stalls, fortunetellers, and everything else that makes for a fantastic night out in a foreign country, it’s billed as one of the reasons to come to Melaka. 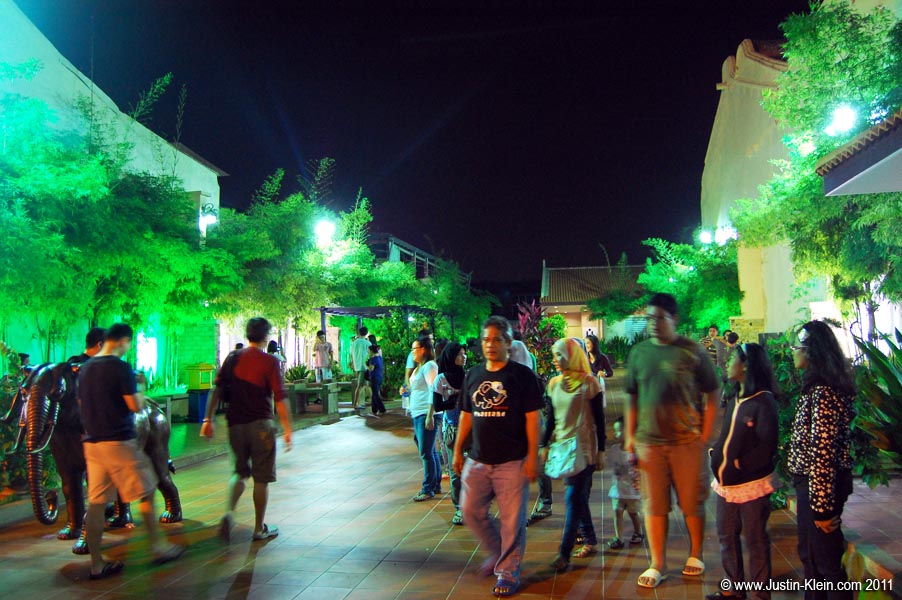 A little garden branching off from Jonker.

And here I was – in Melaka on a weekend. Yet because I’d spent pretty much all of Friday under a pile equations scribbled on scrap paper, rather than interrupt my workflow I figured I’d get as much programming done as I could and save Jonker for Saturday.

Colorful chaos on another of Jonker’s sidestreets.

…Of course, just my luck: Friday was perfect weather and Saturday rained all day 😥 But as I planned to spend several more weeks in town, I just said “screw it” and kept on coding until dinner. Then, when I popped into the lobby to refill on bottled water, I ran into a friendly German backpacker named Steffan. 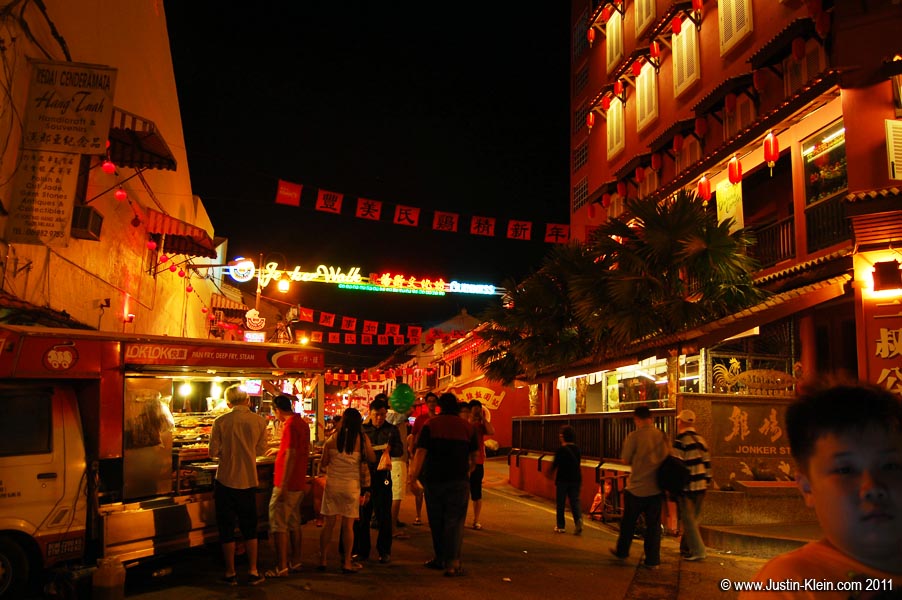 My quick water run ended up turning into a 3 hour chat. Steffan was a linguistics student on his way to China, so we got caught up talking all about the relative complexities of Japanese, Chinese, Korean, and Thai. Then when the rain let up around 11, he suggested we wander down to Jonker. 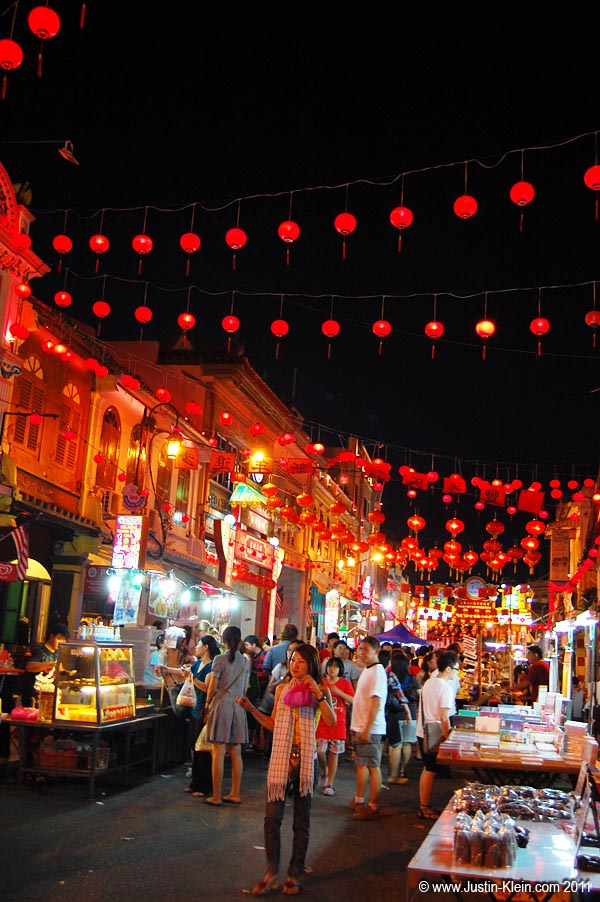 I was still in my ratty workout clothes from a jog earlier that day, but I said “sure, why not.” 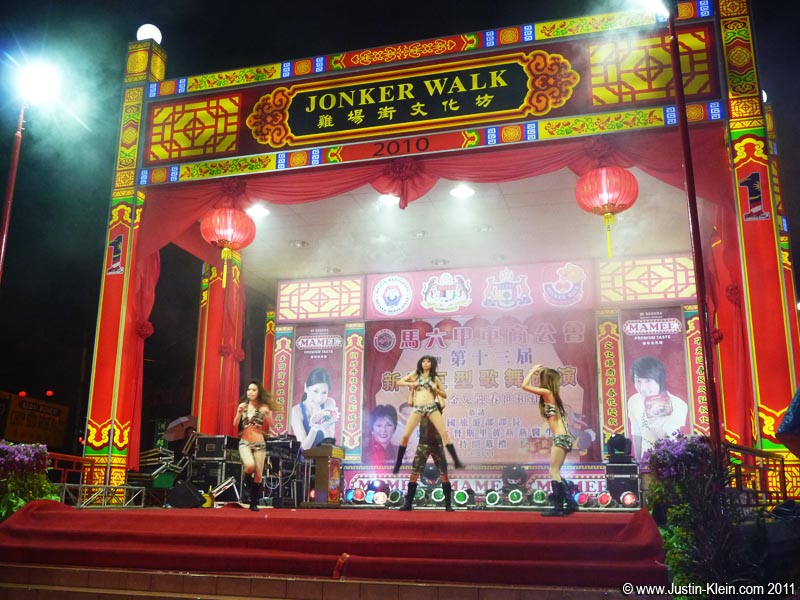 The main stage at the center of the night market.

It didn’t take long to see just how awesome it’d be on a clear evening – even under a drizzle it was bustling, with everything the Lonely Planet had promised. There was even a massive stage for live musical performances (the most popular of which was a dance troupe of hot young Chinese girls wiggling around for an audience of mostly crusty old men).

We wandered our way to the *very* end of Jonker…and guess what I found: 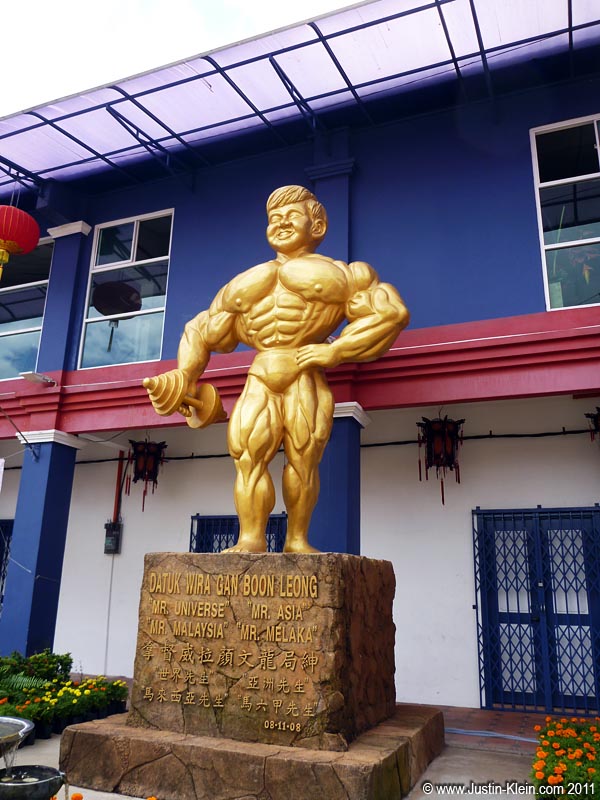 A gym! Founded by none other than a former Mr. Universe – a big celebrity in town. How that slipped the mind of the 2 clerks at Fitness Concept I’ll never figure out…but it looks like “Almost-Perfect” Melaka has just halved the length of its title 😉

Note: These posts are behind realtime; the above took place on Saturday, January 29th.