Last weekend Peder and I visited a little town South of Osaka called Kishiwada, home of the annual Danjiri Matsuri.

Although it’s not a participation event like my favorite Japanese festival, Awa Odori in Tokushima, it is extraordinarily fast-paced (and one of the most dangerous festivals in the country). At least one person dies almost every year as massive crowds stampede through the streets at breakneck speed, pulling enormous “danjiri” – wooden carts in the shapes of shrines or temples – behind them.

On top of these towering, rampaging danjiri stand local participants – waving, jumping, and struggling to avoid being hurled onto the pavement far below.

It’s quite a sight to see, let me tell you.

To the left are two videos from past Danjiri Matsuris, the first containing an actual accident in 2006 (I think).

But you know what? Having been to literally dozens of Japanese festivals in my lifetime, what I noticed most about this one was not the intensity of the festival itself – it was the distinctly small-town feel of the locals in Kishiwada. Not that I haven’t experienced that before…just not yet on this trip back to Japan. 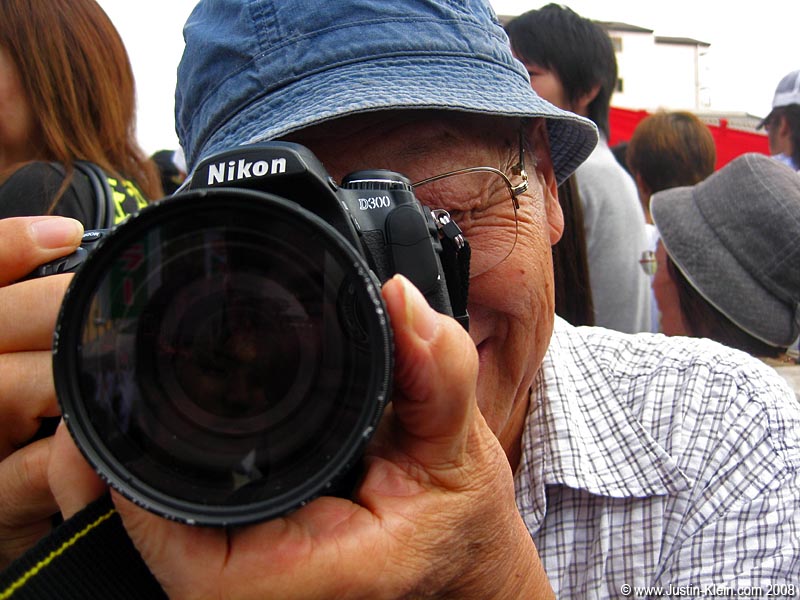 You photo me, I photo you. It’s a fair trade!

As I mentioned (in this post), I’ve felt like the foreign population in Kyoto has risen so dramatically over the past few years that being non-Japanese is no longer a rarity: it’s commonplace. That was not at all the case in Kishiwada. In Kishiwada, we were being stared at, photographed, greeted, hi-fived, and offered drinks left and right.

My response to “OMG look, foreigners!” is always “OMG look, Japanese!”
They seem to get a kick out of it : )

Some long-term foreigners in Japan have a tendency to grow frustrated with this type of attention, regarding the stares as rude or inconsiderate. Personally, I don’t mind a bit, and think it’s quite fun to share a laugh and a story with someone who’s never experienced anything out of their little hometown. And if I happen to be in a rush, I just reply with a quick smile or a wave. Half the time it sends them away giggling joyously – and really, what more could you ask for than to help brighten someone’s day? 🙂 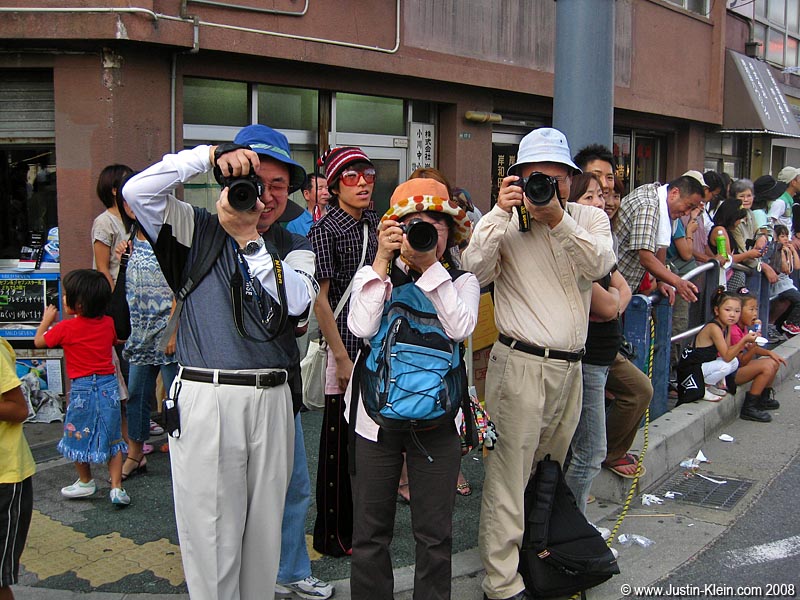 Didn’t you guys come to photograph the DANJIRI? : P

Maybe next time I come to Japan I’ll try living somewhere else for a little while. Like Hokkaido. Not that I’m anywhere near sick of Kansai, but I think it would be interesting to have just a brief change of scene. I guess it all depends on timing though – because there’s no friggin’ way you’ll find me living in Hokkaido during the winter 🙂 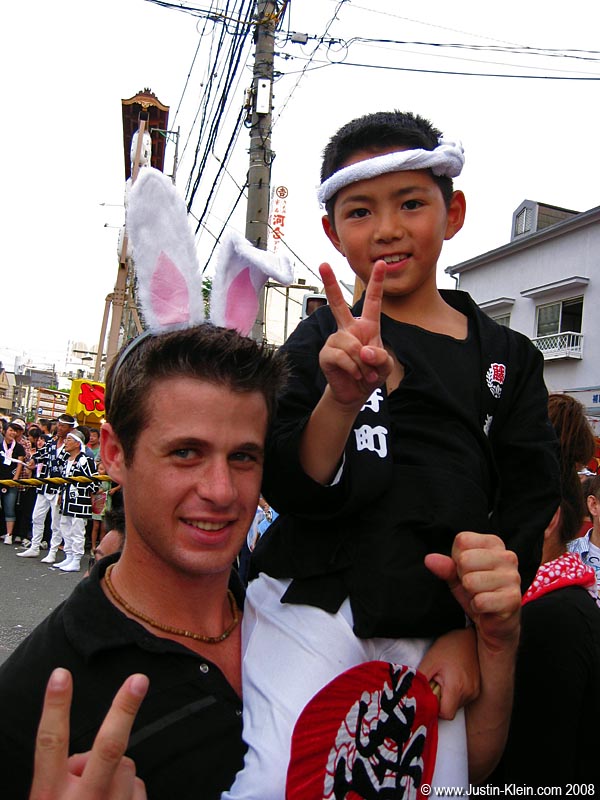 A super-cool kid who wasn’t afraid to ask me anything, and who couldn’t comprehend how I wasn’t embarrassed to walk around with bunny ears on my head.
Apparently he doesn’t know Just Klein very well ; )

Anyway, we hung out in Kishiwada until…er…after the last train, ruining our plans of heading to Osaka for a night out on the way back home to Kyoto.

This resulted in yet another interesting/unusual experience.

After spending a few hours roaming about and socializing with the few small matsuri-circles that remained, we befriended an overweight twenty-something-year-old Japanese guy who was sipping chu-hais with his friends in front of a local shop. He had a bit of a “rough” feel to him, but seemed friendly enough, and couldn’t get enough of inviting us to chugging contests out of the shop’s refrigerator.

We hung out with him until the downtown area completely closed down at which point he suggested calling up some friends and heading to a local Izakaya. It sounded like a fine idea, so we hopped into his car and headed off. 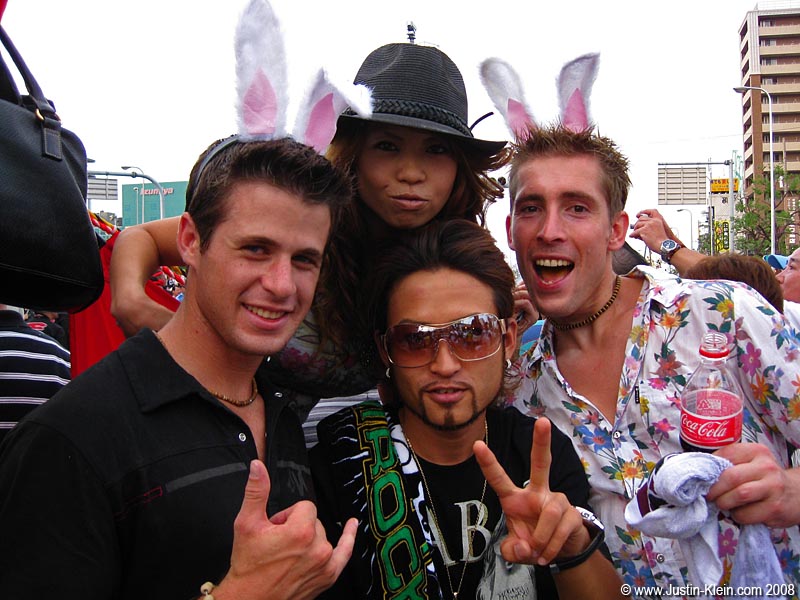 A Japanese “coolguy” and his girlfriend.

Now, I’ve befriended my share of Yakuza in my time, and this guy had their exact vibe. The way he pronounced his words, the types of things he said, and the car he drove all reaked of mafia. Still, while Yakuza may be thought of as dangerous, the fact is that as long as you’re friendly and respectful they can be some of the coolest guys to hang out with. They’ve got connections up the yin-yang, can do pretty much whatever they want and get away with it, and love showing off to new friends. Just don’t mess with their pride or their women and you’ll be fine. 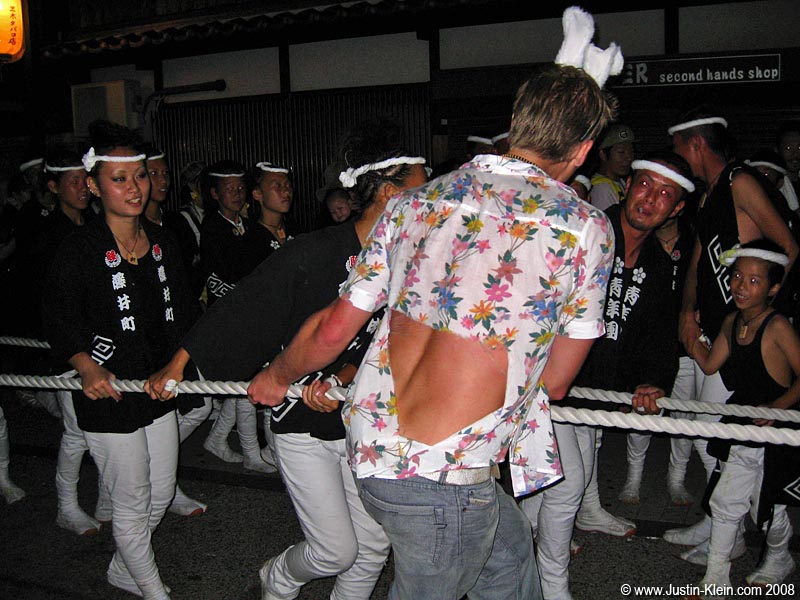 Damn. A large portion of Peder’s favorite shirt got sucked away by the rushing crowds. Japan maybe safe…but the Danjiri Matsuri is far from it.

We hopped in his car, and when he started driving through all the red lights while laughing and honking his horn, my suspicions were all but confirmed.

The Izakaya went pretty much as normal – after picking up a friend on the way we sat down and happily began toasting and sipping mugs of shochu. 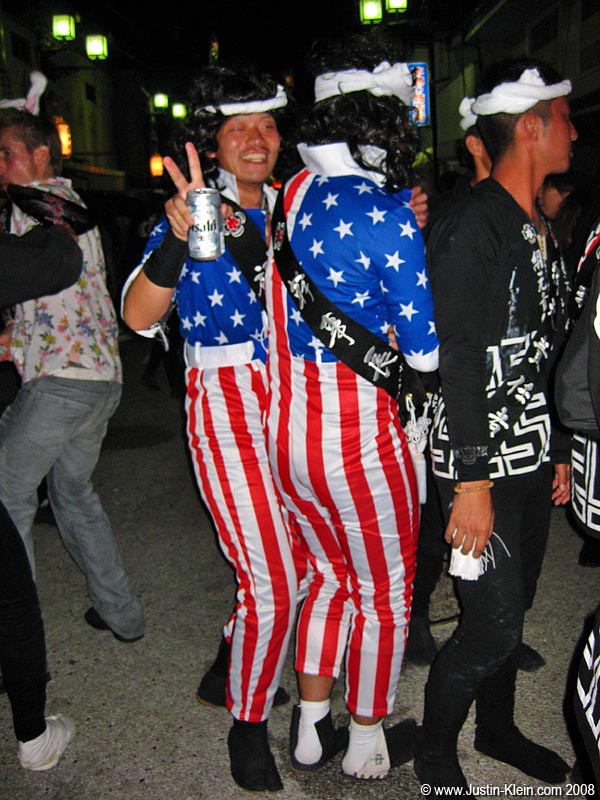 Hah! Wouldja look at those outfits!

All of a sudden he got it into his head that Peder was an A-Hole. I’m not sure why, all I can figure is that due to his inability to speak one word of English I’d spent most of the time talking with him while Peder was talking to his (female) friend. Then when it came time to leave, Peder accidentally hit his leg on the table, pushing it forwards and spilling a bit of shochu on his lap. This pushed him over the top. He grabbed P by the throat, pulled him outside, and began shouting gibberish about not hitting on his girl and about politeness and the Japanese way.

Luckily he was pretty much all bark and no bite, and I managed to get them far enough apart to avoid any further conflict. Phew. That’s over.

When I went back to apologize it became clear just how drunk he was (one minute he was telling me I was welcome to crash at his house, and the next threatening to punch me in the face for no reason). I figured reconciliation was not an option and we’d best head our separate ways. 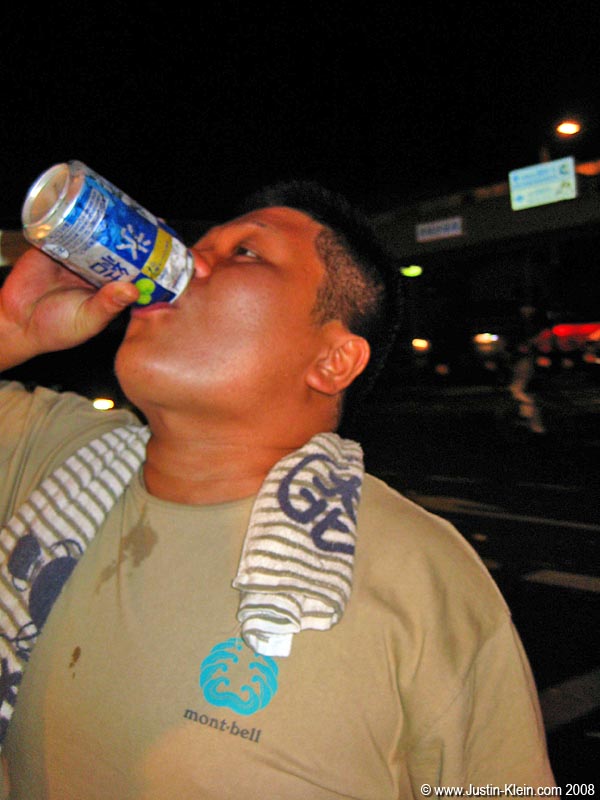 The perfect picture of our suspected-yakuza “friend.”

Now all we had to do was figure out where we were. It was 3am and after driving well out of town, there was nothing around us but a long road with a few houses, a couple izakaya, and plenty of ricefields. So we started walking. Until a little old man on an electric wheelchair happened by and gave us directions to the train station. We walked an hour or so back, but by the time we got there still had an another hour until first train. Having been on our feet almost continuously for the past 16 hours, we decided the best course of action would be to look for a quiet place to catch a quick rest for the next 60 minutes.

We ended up sitting in a small nearby shrine, providing the mosquitoes of Kishiwada the meal of a lifetime. But we got on the first train back to Kyoto, and with no voice left to speak of (pun intended – all the cheering with the danjiri-pullers left me hoarser than after Carnaval) it was finally time for some good, solid rest.

Life is all about strange and wacky experiences, my friends 🙂