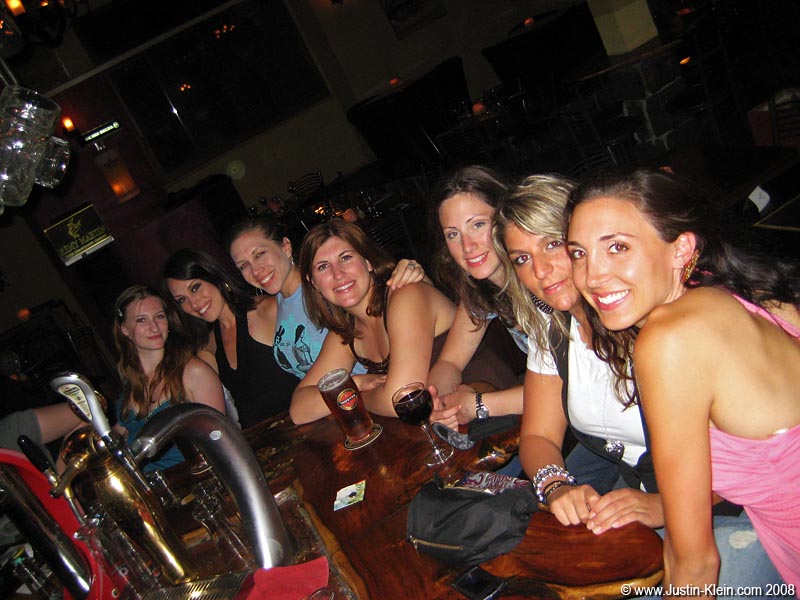 One last night out.

I realized that I’ve been talking a bit about Israeli soldiers without really mentioning that in Israel, everyone is a soldier at one point in their life – service is compulsory for both men and woman (3 years for the former, 2 for the latter). That’s why there’s such a massive military presence: because everyone enters the military after high school. It’s quite an interesting contrast to the US, where you only serve by choice. Over here, anyone you meet on the streets has probably once trained with M16’s and kicked a bit of ass every now and then. 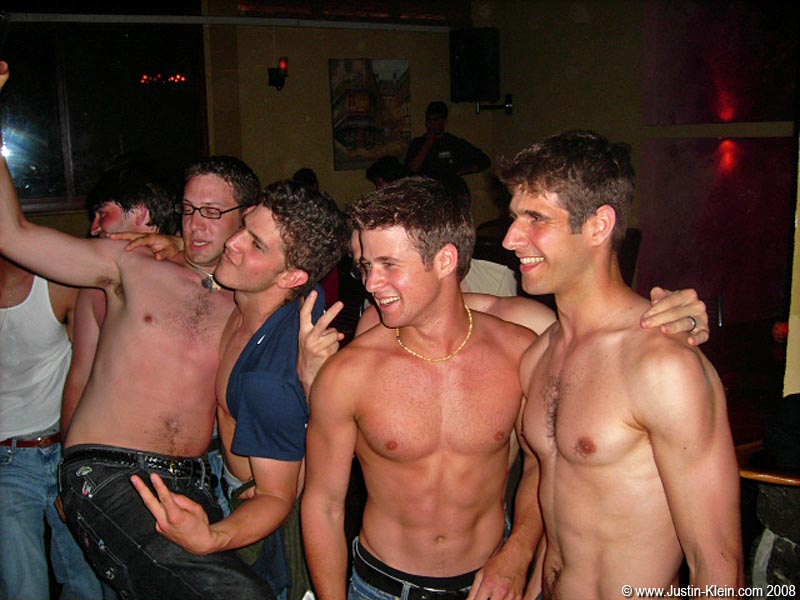 Believe it or not, this was NOT my idea – one of the other guys suggested that for the last song, we all rip our shirts off and grab a girl to dance with. This was taken during the after-the-fact applause.

After one last night of drinking and dancing at a local bar near our Kibbutz, the “regular” part of our Birthright trip had finally come to an end. If this were any other Birthright, we’d now be going home.

But luckily this wasn’t a regular birthright. 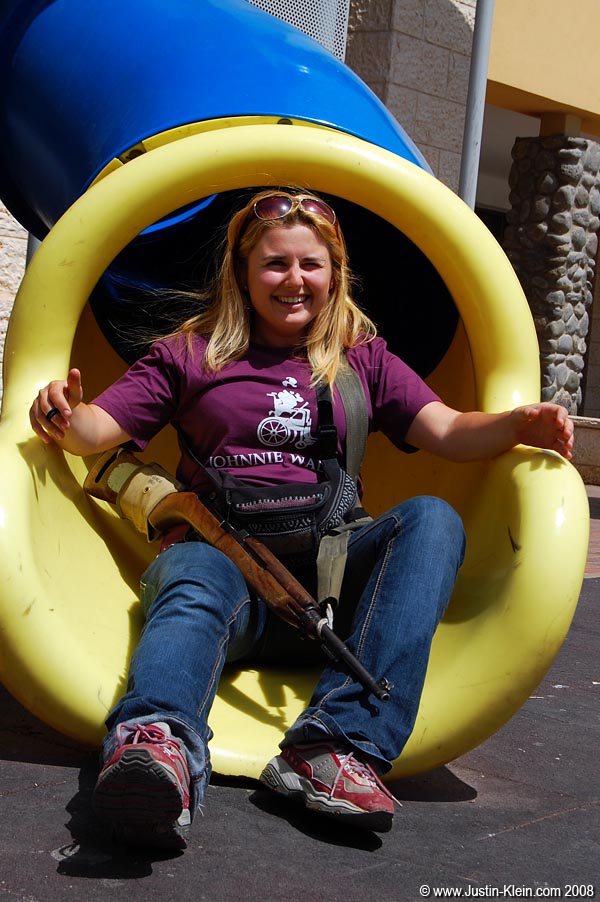 Natalia, one of the group’s armed escorts. Even when going down slides and having fun she can never separate from her rifle.

In honor of Israel’s 60th anniversary, thousands of soldiers participated in a massive cross-country bike ride. And as a special bonus, three days were added to our trip so we could join them. 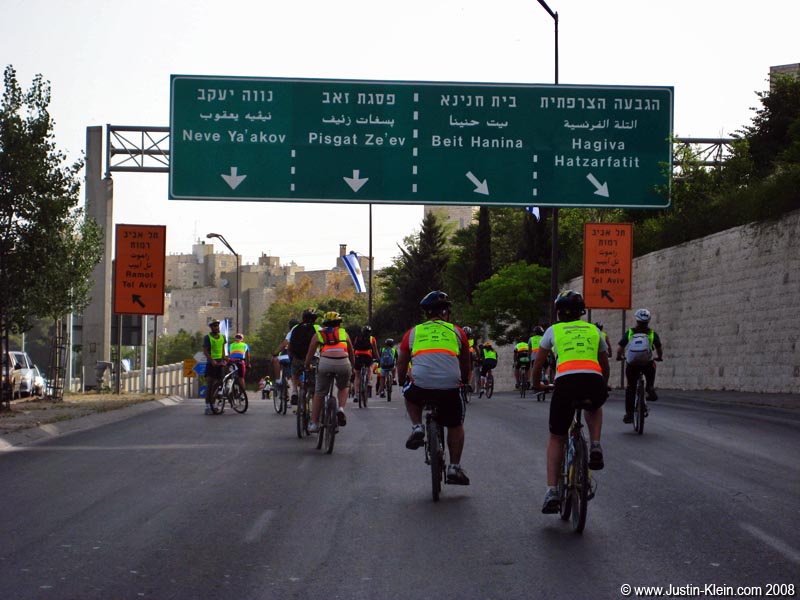 Through the streets of Jerusalem.

Think about just how unique of an opportunity that is. We were the only group to have ever been allowed to participate. Riding our bikes through the closed highways of Jerusalem, alongside the Palestinian territories, and through the Negev desert – with thousands of young locals just like us. Pretty damn cool. 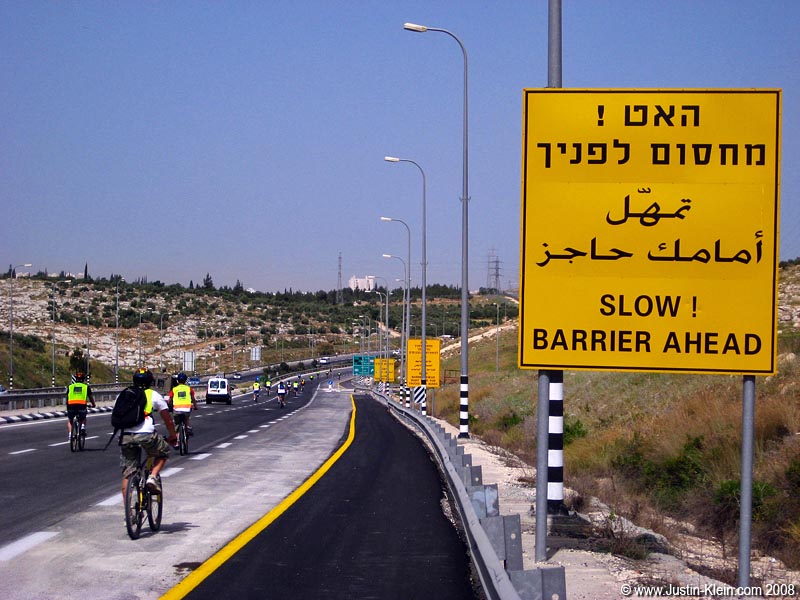 Virtually all streetsigns in Israel are in 3 languages: Hebrew, Arabic, and English.

Unfortunately, the ride was plagued by yet another Avner-ism: “for the safety of the group” no one would be allowed to ride in front of him, ever. He rode incredibly slow – so slow it was actually difficult. Plus we had enforced rest stops approximately every twenty minutes. I was itching to speed on ahead. 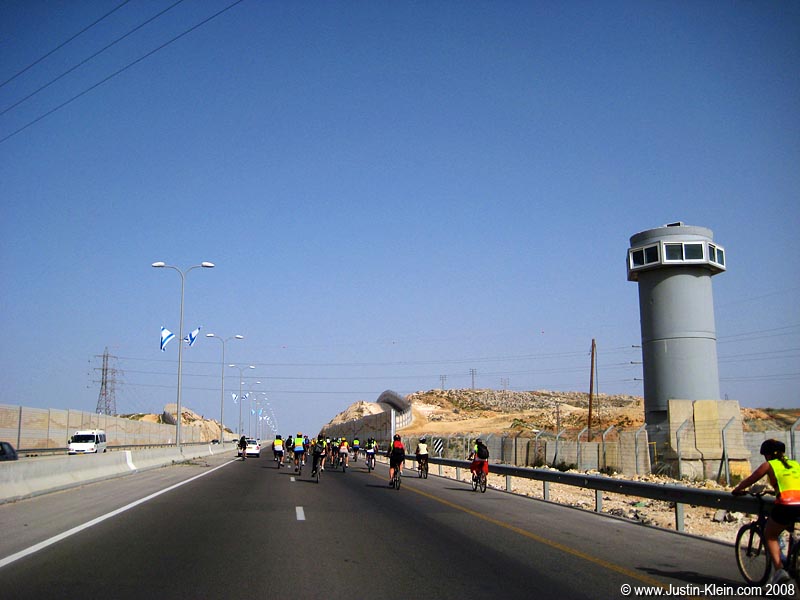 A guard tower near the Palestinian border.

Luckily though, as more and more people complained he began to pick up the pace, and by the second day he was riding pretty consistently. I was able to further relieve the problem by stopping completely, waiting for as long as possible, and then riding at a more reasonable pace until I caught up. It wasn’t ideal, but by the second and third days I’d pretty much gotten used to it. And the scenery in many cases was so fantastic that I almost didn’t care. 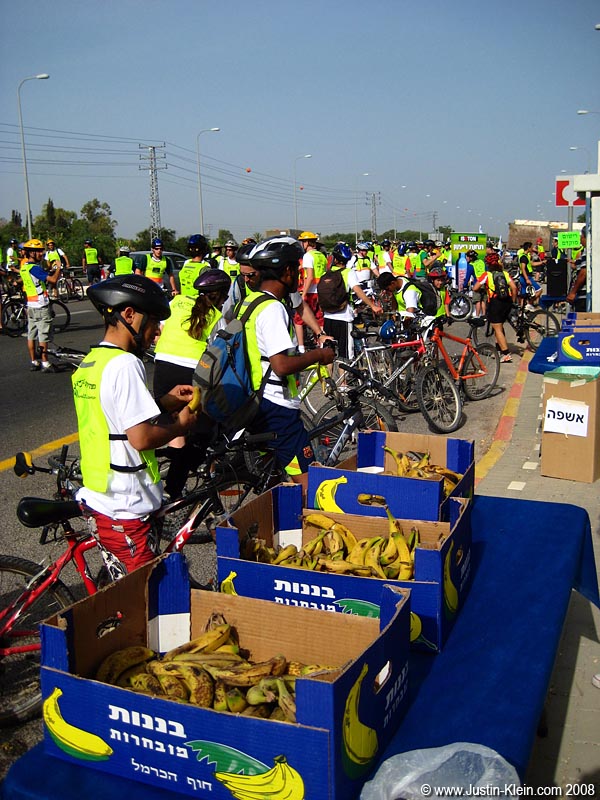 One of the ride’s official rest stops.

Every so often the entire swarm of soldiers would pull off at an official rest stop, each of which offered free snacks and music – quite a nice bonus when you’ve been sweating in the desert sun for hours on end. 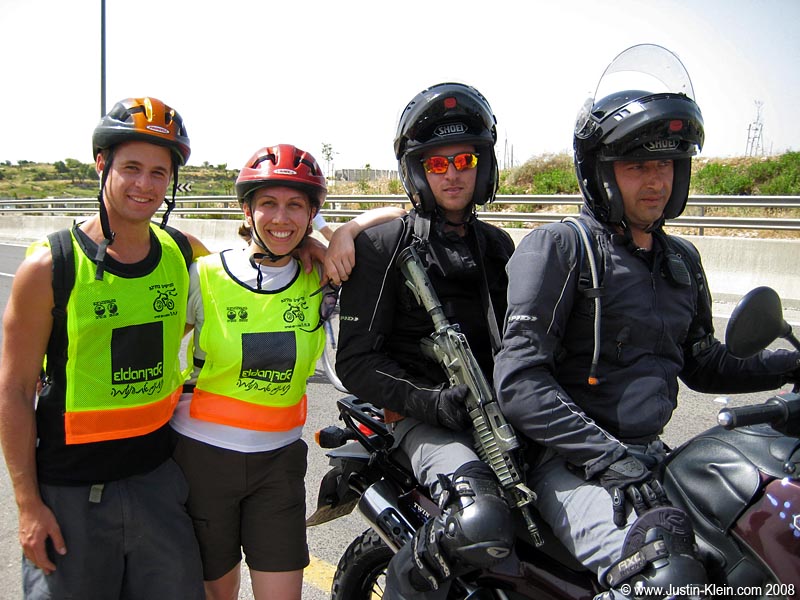 And since each day’s ride (er, the portion that we participated in) only lasted part of the day, we had plenty of time to stick in a number of afternoon activities over the course of the 3 days: 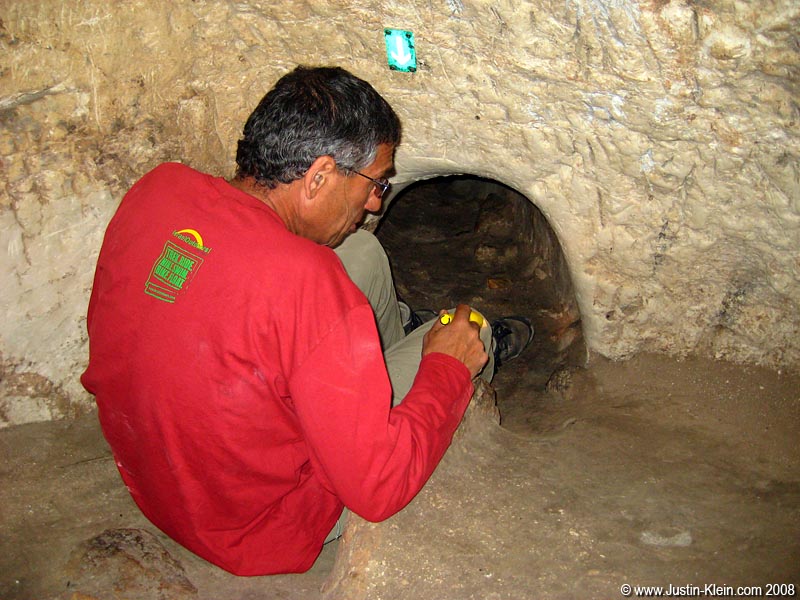 Look at the size of that crawlspace!

Such as some fantastic manmade thousand-year-old caves! How did Avner know? He must’ve been reading my blog when I wrote about Ouro Preto in Brazil 😉 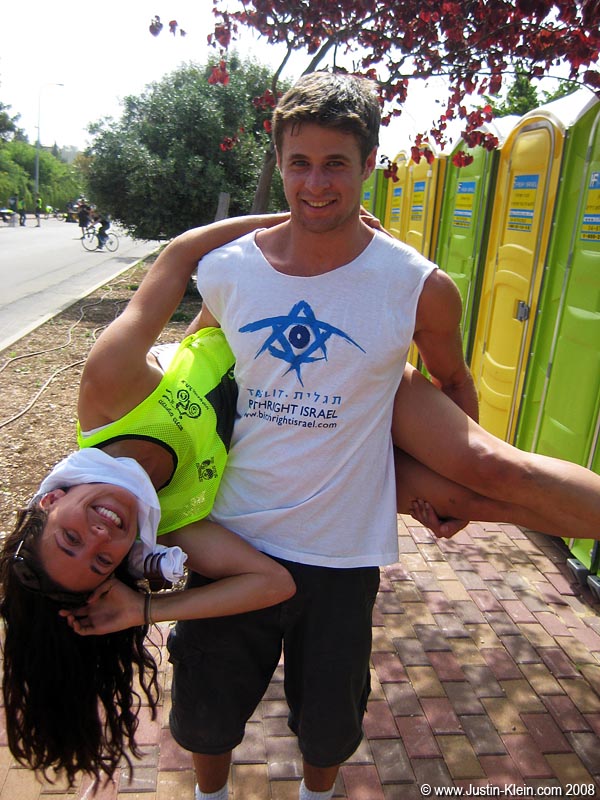 Killing time while we wait for the race to continue.

(Actually, I did tell him the story about how Peder and I ran away from the tour group and explored on our own by candlelight. His response: “You’d better not do that with me.”)

These particular caves were spectacular primarily because of their size – they were just barely large enough to crawl through, and since they twisted and turned for some surprising distances they started to become frighteningly claustrophobic at times. You literally had to crawl on all fours with your back dragging against the ceiling and both sides dragging against the walls. I was surprised some of the other adventurers didn’t get stuck along the way! 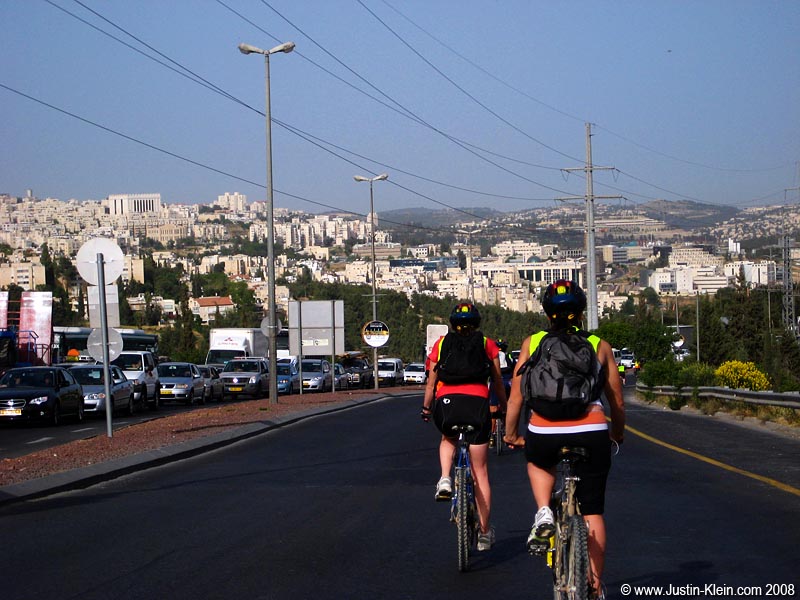 Sucks to be stuck in your car…

(The reason the caves were constructed this way was because they were built as a way to escape from attacking Romans. The Jews could flee into the caves, and as only they knew their way around in the pitch dark, they could easily loop around and come up behind their attackers – ending the pursuit in a most painful but efficient way.) 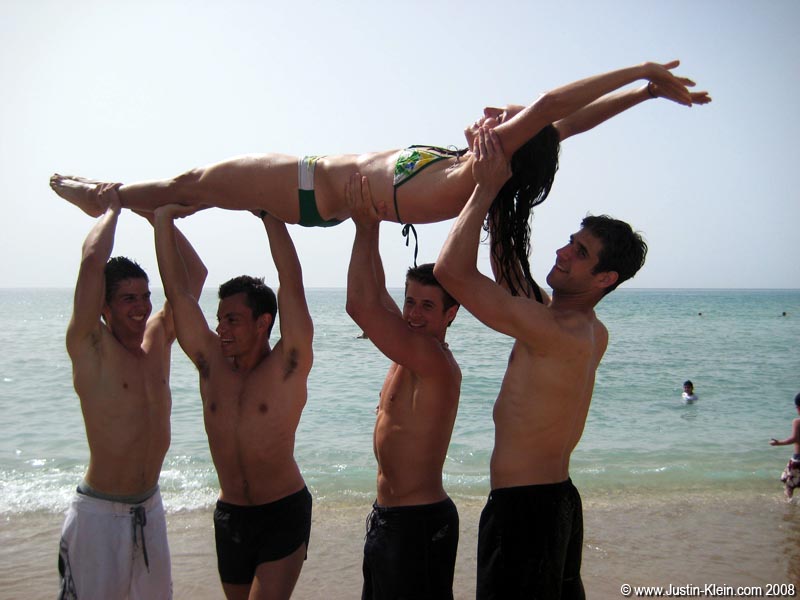 ANOTHER free ride for Kara??

Another one of our stops – due to popular request – was a brief beach excursion in Haifa. Between the first and second nights of riding we’d spent the evening camping in a forest outside of Jerusalem, without access to either showers or toilets. Imagine how nice we all smelled after a full day of exercise under the blazing Middle Eastern sun with sand blowing in our faces, then shimmying through underground caves, and finally sweating all night in our sleeping bags without a shower. The beach was an attempt to get some of that grime off for the following day. 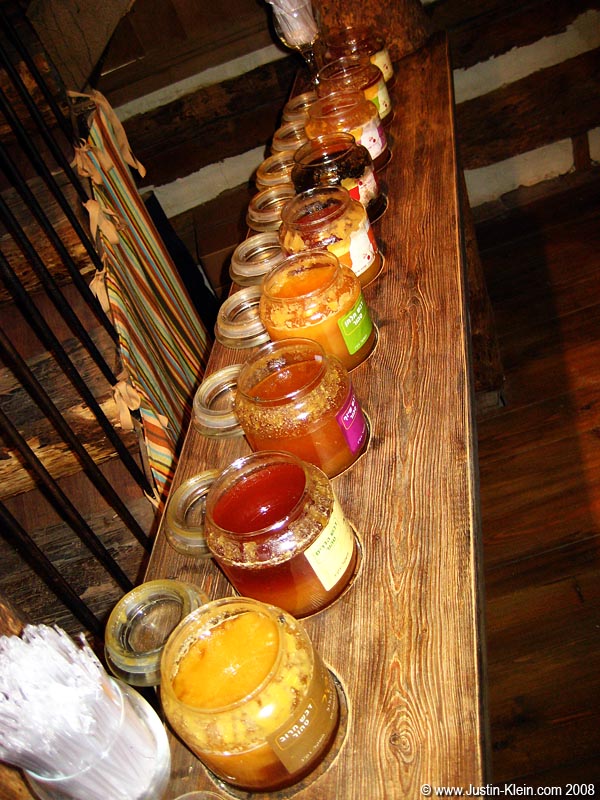 A number of the whinier participants didn’t like that we were being pushed so hard physically and not being given proper showers and toilets. My personal response is “give me a break, if you can’t handle the outdoors you shouldn’t choose a trip organizer called Israel Outdoors.”

These were the same people who got on the bus behind the cyclists at the first opportunity rather than pushing through the entire ride with everyone else. I have no problem with the fact that some people might be more or less fit than others…but come on, if you’re going to come on a trip like this you should at least try 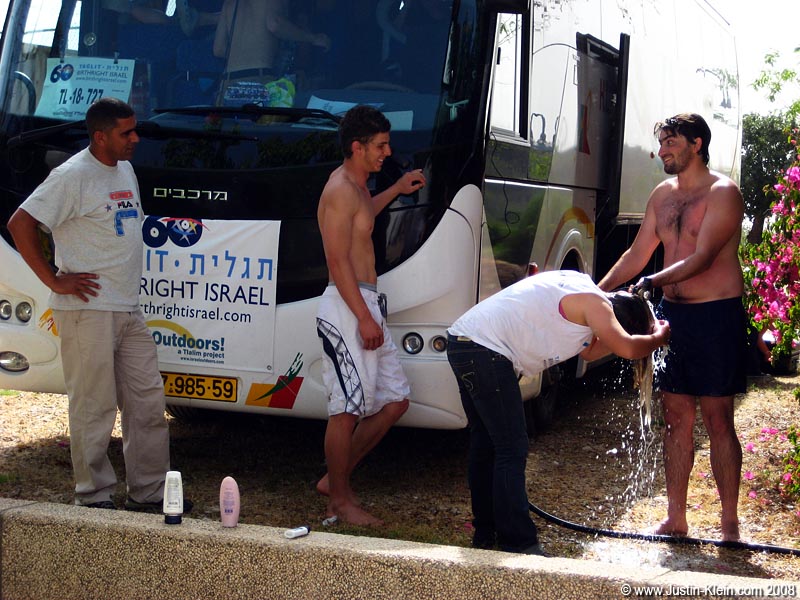 No showers again?? That’s alright…I guess garden hoses will have to suffice.

After completing the second day’s ride we stopped for a bit of wine tasting at a winery in the Upper Golan before camping in a park in Avner’s village – this time with community showers. Avner even invited us into his house to taste a bit of his wife’s home cooking. Outstanding! 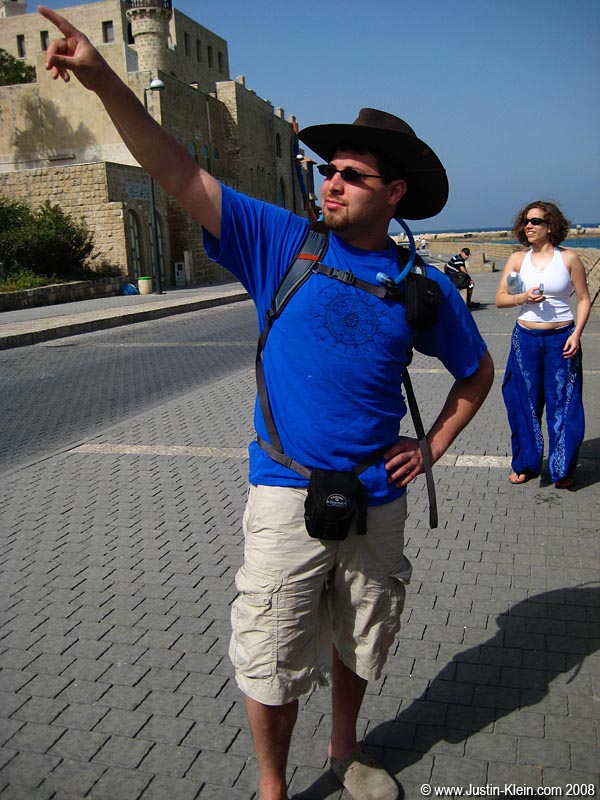 Finally, after the third and final day’s ride concluded, we headed to Akko and a Turkish street market before returning to the airport to say our final goodbyes.

Since separating from the soldiers back in Jerusalem, each of them had returned to the group at least once or twice – on their individual days off – to come and spend as much time together as possible before all had to split up and return to the US. But now, for our final night, every one of them came to wave goodbye. We were all together, and although we were about to separate, it still felt great.

Birthright was over. But my adventure in the Middle East was not. Mike, Sammy, Robbie, and myself proceeded to the El-Al Airlines ticket counter and changed our return tickets home.

No way you’re getting rid of us this easy, Israel. 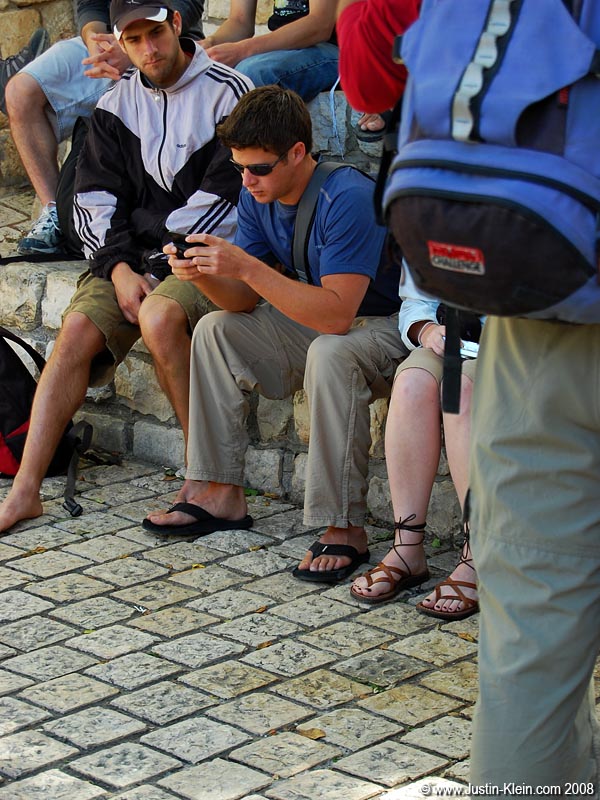 Caught in the act. Alright, so I did keep some blog notes on this trip. But they were nothing in comparison to the usual.

The preceding six posts were very abbreviated and skipped over quite a few events; after falling three weeks behind, and still being in the middle of a long-term trip, all I could do to catch up was omit smaller details and personal thoughts, writing only about the major stuff.

Apologies. It’s not my usual style of writing. But hopefully it’s enough to give a fair sense of what my Birthright experience was like 🙂

2 Responses to “Birthright 6: Biking with Soldiers”